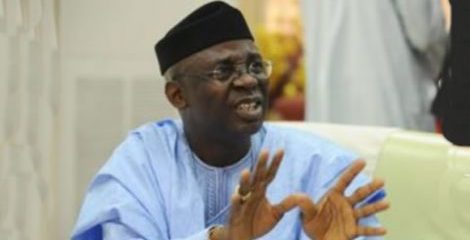 The Serving Overseer (SO) of the Latter Rain Assembly, Pastor Tunde Bakare, has described Nigeria as a sick nation over the brazen assault the girl-child continues to go through in the country.

He stated this in Abuja, on Saturday, while delivering his keynote address at the 2nd Annual Chibok Girls lecture organised by the Bring Back Our Girls group in commemoration of the fourth anniversary of the abduction of about 276 schoolgirls from the Government Secondary School, Chibok, Borno State, on April 14, 2014.

He spoke on the theme, “Towards a just and good society: Renewing our commitment to the girl child in Nigeria’.

Bakare, who was Buhari’s running mate during the 2011 presidential election, also spoke on the Boko Haram onslaught on girl-child in Northeast Nigeria,

According to him, “From the recent events at Government Girls Science Technical College, Dapchi, it is obvious that the dark chapter that was opened four years ago today is still open. While I rejoice with the students who were returned and their families, even as I remember and extend my heartfelt condolences to the families of the girls who lost their lives, permit me to use this occasion to demand that Leah Sharibu, who is still being held by the terrorists, be brought back home alive and unhurt, not just because her parents and the Nigerian people of all creeds cannot wait to see her back, but also because of what she now represents for the Nigerian nation.

“Leah Sharibu has become the symbol of the validity of the Nigerian constitution, Section 38 of which guarantees religious freedom; therefore, her safe return is synonymous with the constitutional stability and sanctity of the Nigerian state. The Nigerian government must do all that is necessary to bring her back alive. Our hearts go out to her parents and our prayers go out to her wherever she is at the moment and we affirm, in the spirit of hope that, very soon, we will see her safely returned to us.

“One of the key indicators of stability or the lack thereof in a nation is the state of its girl child because she is often the most vulnerable in a destabilised polity. The problematic issues encountered by the girl child in any society are symptoms of an underlying malady which must be diagnosed. In essence, the brazen assault on the girl child in the Nigerian state is a clear indication that our nation is sick.”

According to Bakare, the fact that Boko Haram had continued to target females, especially schoolgirls, was a reflection of how women were being treated in the larger society.

The chairperson of the event, Mrs. Najartu Mohammed had earlier urged government to do all in its power to ensure the protection of the girl child.

The fiery cleric regretted that President Muhammadu Buhari could reduce the African woman to just the kitchen and the bedroom.

He was referring to Buhari’s comment sometime ago in Germany, that his wife, Aisha Buhari, belonged to the “kitchen, the living room and the other room.”

“Our President was standing next to the most powerful woman in the world and reduced the African woman to just the kitchen and the bedroom. I stand here to say that women are not objects to be used but persons to be respected.

“If that was meant to be a joke by the President, then, that is just an expensive joke that is uncalled for on an international scene. It was unnecessary and even an embarrassment to even the mothers that bore us and the daughters that we are raising.

“Their place is not just in the bedroom or kitchen; their place is also in the parliament and one day, who knows, the day will come that even the Villa will be occupied by a woman in this country.”