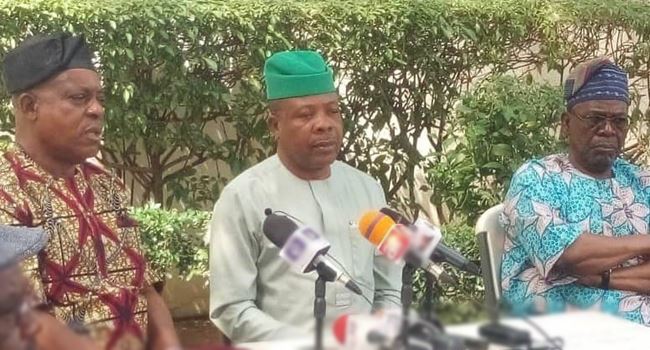 The Peoples Democratic Party (PDP) has called on the All Progressives Congress (APC) to desist from its alleged attempts to sway the Supreme Court to jettison the “consensus demand by Nigerians for a judicial review and reversal of the defective judgment on the Imo state governorship election”.

The party also cautioned the APC to end its alleged blackmail and lobbying on the corridors of the judiciary with the view to influence the Supreme Court to snub Nigerians and disregard calls to correct the supposed manifest mistakes the apex court made on the Imo judgment.

The PDP further berated APC leaders, particularly its National Chairman, Adams Oshiomhole, for allegedly attacking Nigerians and blackmailing the judiciary with distortions, manipulations and misrepresentations of facts aimed at diverting attention as well as cowing the Supreme Court from delivering justice in the impending review.

The Supreme Court recently sacked Emeka Ihedioha of the PDP as Imo State governor and declared Senator Hope Uzodinma of the APC as the governor of the state.

The PDP has continued to insist that the judgment should be reviewed on the argument that the Supreme Court erred in its ruling in the matter.

The APC, through its national chairman, Adams Oshiomhole said the opposition party demands for the review of the judgment was unnecessary.

But in a statement by the national spokesman of the PDP, Kola Ologbondiyan on Saturday, the PDP said, “It is worrisome that the national chairman of a political party will be making a public boast of a daylight political robbery and parading those who don’t mean well for the future of Imo State.

“While the PDP notes that it is a waste of time to join issues with Adams Oshiomhole in his blackmail and misinformation, our party affirms that our demand remains incontestable as the Supreme Court itself had in the past reversed its judgment after realizing defects and subversion of justice in its judgment. The case of Johnson vs Lawanson (1971) 7 NSCC 82 is a clear precedence.

“We in the PDP believe in the finality of the judgment of the Supreme Court. But we also believe that the Honorable Justices of the Supreme Court possess inherent right and powers to right every wrong that may be discovered in its judgment arising, as it were, from human errors such as happened in the Imo State judgment.

“We trust that the apex court will not be persuaded by the ill motivated campaigns of blackmail launched by the embattled chairman of the APC from seizing the initiative presented by the application of Hon Emeka Ihedioha and our Party to delete this unjust page from the annals of clean records of justice.”

The party claimed the envisaged review of the judgment would benefit all in many ways such as:

“It will also correct the illogicality of having two governorship candidates for the APC in the same election as the apex Court had earlier ruled that Uche Nwosu was the validly nominated candidate of the APC and not Senator Hope Uzodinma declared by the Court as the winner of the same election on the platform of the same APC. The Supreme Court had also disqualified Uche Nwosu, the candidate of the Action Alliance (AA) from the election for having acquired the governorship ticket of two political parties; the APC and the AA.”

It added, “A judicial review on Imo governorship election is inevitable because by these earlier judgments of the Supreme Court, not only is Hope Uzodinma not a candidate, the judgments also nullified all votes credited to APC and AA as they no longer have candidates in the election.”