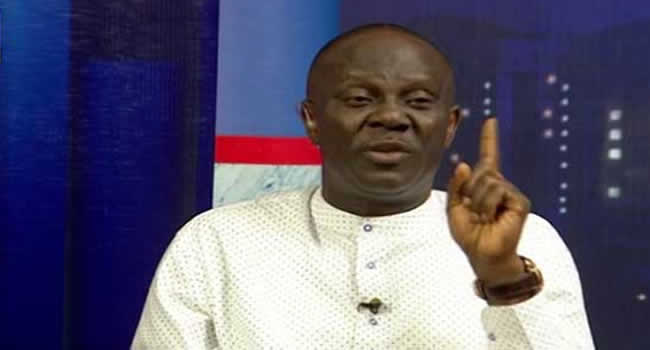 Prince Kassim Afegbua, a former Commissioner for Information in Edo State, and a chieftain of the Peoples Democratic Party (PDP), has threatened to sue the National Chairman of the party, Uche Secondus, to the tune of N3 billion.

He made the threat after Secondus filed a case of defamation of character against him (Afegbua) for accusing him of the alleged misappropriation of N10bn from the coffers of the party.

Afegbua and Secondus have been locked in a legal battle following his (Afegbua’s) allegations that the party Chairman had misappropriated funds from sales of firms to aspirants, and meant for the running of the party, an accusation Secondus had vehemently rejected and took Afegbua to court for allegedly defaming his character.

In Secondus’ pleadings, he had asked the court to compel Afegbua to tender an unreserved apology to him in some national newspapers, as well as paying him damages to the tune of N1 billion.

But in a resumed exchange, the Edo-born politician who was a former spokesman to former military President Ibrahim Babangida and a founding member of the PDP, insisted that the said funds were misappropriated under Secondus’ watch and made known his intention of suing Secondus.

In a letter of counter-claim through his lawyers, Emeka Etiaba (SAN), of Etiaba & Co, dated April 30, and served on Secondus on Friday through his lawyers, Afegbua said he was not prepared to entertain any of the demands earlier made by the PDP Chairman as he was desirous of pushing his claims to a logical conclusion as he wants the party’s account records to be thoroughly scrutinized by anti-corruption agencies.

In the letter of the counter-claim titled “Re-Case of Defamation of Character of Prince Afegbua said he was denying every allegation contained in the letter by the PDP Chairman, particularly the “allegation that he authorized the publications of the alleged information in the newspapers.

According to him, he did what any conscientious citizen would do by calling the attention of appropriate authorities to what he felt was a wrong doing, and that Secondus should answer the issues he raised, rather than claiming he was being defamed.

READ ALSO: Afegbua an ‘inconsequential blackmailer’, PDP responds to petition it made N10bn via sale of forms

The counter-claim added:
“Our client is not unaware of series of petitions and allegations against your client which are currently under investigation by both National and Foreign Law Enforcement Agencies (he shall unravel same at the appropriate forum).

“Similarly, his confessional statement and almost two weeks detention when he was arrested by the Economic and Financial Crimes Commission in 2016 on the allegation of illegal receipt of 25 luxury vehicles is quite instructive and pungent on this matter.

“We, therefore, do not see how our client’s lawful and privileged Petition to Law Enforcement Agencies has affected the reputation of your client which he has already created for himself through his words and actions.

“We have come to the irresistible conclusion that we find Prince Uche Secondus’s demands for an apology and his ₦1,000,000,000.00 (One Billion Naira) in damages as ridiculous, laughable and shadow-boxing, giving the unavoidable impression that your client is simply an actor in the theatre of trivialities and farcicality.

“Considering the defamatory content of the letter dated 29th April, 2021, which has been wittingly circulated in print and electronic media including Vanguard, Guardian Newspapers, Whatsapp Messenger, Facebook, Twitter and Instagram, to discredit our client’s reputation, we shall not hesitate to counter-claim the sum of ₦3,000,000,000.00 (Three Billion Naira) as damages for defamation, cost of prosecution and other claims which shall be disclosed at the appropriate forum.”