PDP apportions blame over police shooting of Bamidele, 5 others 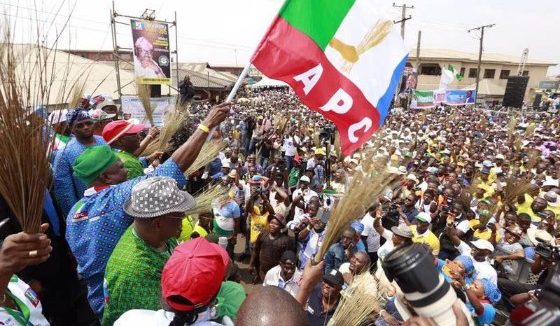 The Peoples Democratic Party (PDP) has revealed those to be blamed for the sporadic shootings in Ekiti on Friday that left six people with police gun shot.

The unfortunate event took place at the All Progressives Congress (APC) rally in Ekiti State, with a governorship aspirant of the party, Opeyemi Bamidele, among the six persons shot.

The PDP in its response said that Ondo State Governor Rotimi Akeredolu and the APC governorship candidate, Dr. Kayode Fayemi, should be held responsible for the ugly incident at the party’s state secretariat on Friday.

The PDP made this revelation in a statement by the director of media and publicity Kolapo Olusola Campaign Organisation (KOCO), Lere Olayinka on Friday.

The statement read in part, “Today (Friday), the governor of Ondo State, Rotimi Akeredolu and the All Progressives Congress (APC) governorship candidate, Dr. Kayode Fayemi invaded Ekiti State with armed policemen and thugs, throwing the state that has been peaceful since the advent of Governor Ayodele Fayose’s government into bloodshed.

“Akeredolu led the All Progressives Congress (APC) governorship candidate, Dr. Kayode Fayemi to Ekiti in a show of federal might and in the process, seven people were hit by police bullets.

“At the APC secretariat, one of the mobile policeman, was said to be using his gun to push away the thugs brought from Ondo State and the hoodlums in turn dragged the gun with him, leading to sporadic shootings that left six persons shot.

“One of those injured was Hon. Opeyemi Bamidele. Five others also had gunshot injuries.

“The APC thugs backed by armed policemen later went on rampage at Ojumose area of Ado Ekiti, destroying the canopies and chairs in front of the residence of late Prince Adegoke.

“As usual, the APC went to town with story that the policeman who fired the shots at the party secretariat was fake.

“However, information available to us is that the policeman was brought from Ondo State by Governor Akeredolu.

“Consequently, we challenge the Police authority to release the identity of the police officer to the public and how he left Akure for Ado Ekiti.

“We also wish to alert the public of the possibility of the APC shenanigans plotting to assassinate the policeman so as to sustain their lie that he is fake.

“We make bold to say that Governor Akeredolu of Ondo State and Dr Fayemi must be held responsible for any breakdown of law and order in Ekiti State. We are aware of their mobilisation of thugs from Ondo State to Ekiti for the July 14. The governor even reportedly boasted that he was ready to spend two months allocation of Ondo State on Fayemi’s election.”