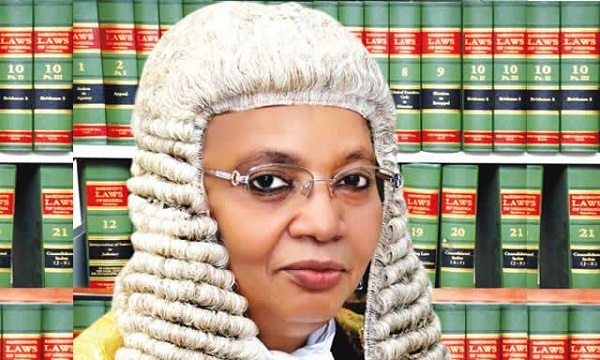 The National Working Committee (NWC) of the Peoples Democratic Party (PDP) has written the president of the Court of Appeal, Justice Zainab Bulkachuwa to recuse herself from the Presidential Election Tribunal sitting over the petition filed by its presidential candidate, Atiku Abubakar.

PDP says it is worried about Justice Bulkachuwa being the chairman of the panel to hear Atiku’s petition because her husband is an All Progressives Congress (APC) Senator.

According to the PDP, it would be difficult to convince any reasonable person that she will not discuss the case with her husband who is an interested party.

The letter titled ‘A Request To Recuse Yourself From The Panel Hearing Petition No. CA/PEPC/002/2019, was dated May 8, 2019 and signed by PDP National Chairman, Prince Uche Secondus and the National Secretary, Senator Umaru Ibrahim Tsuari.

A copy of the letter which was obtained by Vanguard read in part: “My Lord, it is no more a secret, that your dear husband, Hon. Adamu Mohammed Bulkachuwa, contested the February 23, 2019 election for the position of Senator in Bauchi North Senatorial district and won same on the platform of the All Progressives Congress (APC).

“This information is not just in the public domain but has dominated both public and private discussions to the extent that it has become a sore source of worry not just for members of our party but to the generality of Nigerians because of your very unique and critical position as the President of the Court of Appeal which is saddled with the sacred responsibility of hearing petitions arising from the presidential election.

“This fear was palpable enough just with you as the President of the Court of Appeal but has now been worsened and compounded by the discovery that you have decided to appoint yourself as chairman of the Panel to hear the petition.

The party added that “we are reasoning that, armed with this golden rule of justice as fair hearing and given your direct intimacy through your dear husband, with the APC, one of the parties in this Election petition, your lordship would have exercise your constitutional right and powers guardedly, judiciously and judicially, by excluding yourself from the panel of this honourable court sitting over the particular petition.

“It is based on the above premises, therefore that we are constrained to respectfully request for your Lordship to recuse yourself from presiding over and/or sitting as a member of the panel hearing the instant petition as it would be impossible for your lordship to convince any reasonable man that your dear husband never discussed this petition, which he is patently interested in its outcome with you, throughout the trial.”