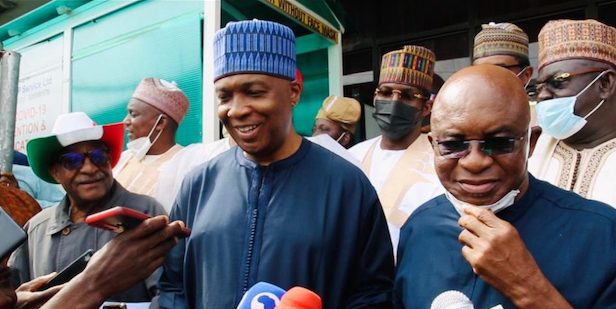 The Peoples Democratic Party (PDP) Board of Trustees (BoT) met on Thursday to resolve the leadership and other internal crises rocking the party.

The BoT Chairman, Sen. Walid Jibrin, in his remarks at the meeting held at the PDP national secretariat in Abuja, said the forum was necessary to tackle numerous problems requiring the attention of the highest advisory body and conscience of the party.

He said the time has come for PDP to put its house in order ahead of the 2023 general elections.

Several national officers of the PDP had on Tuesday resigned from the party over poor handling of its affairs by the National Chairman, Uche Secondus.

The chairman said: “In order to achieve complete success, we must do away with personal interest and unnecessary in-house fighting, capable of killing the objectives set by the party.”

He said the BoT would look critically at the party approved organs and advise members to function very well in order to fulfill the dreams of PDP’s forefathers.

Jubrin added: “In the light of the foregoing, it is very important therefore, that the BoT being the conscience of the party, must today come up with necessary strategy for election of our national leadership, based on a free and fair election that will produce credible and competent officers of our party.”

He stressed that the BoT was always ready to listen to any group, committee, or individual with good intentions aimed at promoting peace and unity in PDP and Nigeria.

“We must sit with the national chairman and the NWC, to come out with decisions that will make our party strongest.

“While truth is bitter, we must cope with the bitterness by taking serious actions to handle this situation,” the BoT chairman stated.

In his remarks, Secondus said the meeting was critical not only for members of the National Working Committee (NWC) but the party as a whole.

Secondus said the time has come for the party to brace up and come out stronger.

He said: “I believe that in every human endeavour where there are issues, the issues must be tabled, discussed, and solutions proffered. Those solutions will make our party strong.”

Related Topics:#featuredPDPPDP party crisis
Up Next