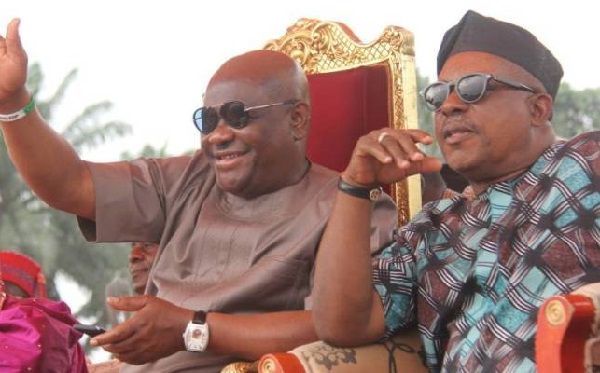 The Peoples Democratic Party (PDP) has described Governor Nyesom Wike’s victory in the Rivers Polls as “victory for the people of Rivers and triumph of good over evil.”

While congratulating Wike, the PDP in a statement signed by its National Publicity Secretary, Mr Kola Ologbondiyan, the party noted that Wike’s record 700,000 votes margin of victory “speaks volume of the resilience of the people of the state in the face of intimidations, harassment and manipulations by oppressive forces”.

The governor was declared winner of the poll by Independent National Electoral Commission (INEC) on Wednesday in Lagos after a resumed collation of ballots of the poll held across the country on March 9.

Collation of the votes was suspended by the INEC, which cited violence and other electoral irregularities during the election in the state, as reason for the action.

READ ALSO: I have evidence of how my votes were ‘stolen, suppressed, diverted’- Moghalu

INEC declared that Wike won the election with 886,264 votes, while his opponent, Biokpomabo Awara, of African Alliance Congress (AAC) trailed with 173,859 votes.

Ologbondiyan said that the victory reinforced the confidence of the people in the resoluteness of asserting their democratic choice of leadership as well as standing in defence of their mandate to the end.

The party’s spokesman added that the victory also demonstrated that the will of the people would always prevail against every form of suppression.

Furthermore, he said that All Progressives Congress (APC) wanted to forcefully take over control of the state against the wish of the people.

“The party salutes and venerates all compatriots who were killed by agents of the oppressors during the election. These compatriots did not die in vain and those who shed their innocent blood will surely be brought to book.

“The PDP commends Wike, the people of Rivers and all lovers of democracy across the board for standing firm until the end to hand this disgraceful defeat to the enemies of the people.”

Ologbondiyan also congratulated all PDP candidates, who won elections at all levels across the country.

He assured those pursuing their mandates at the tribunals that the party was fully behind them, “given that they all have water tight cases at the courts”.