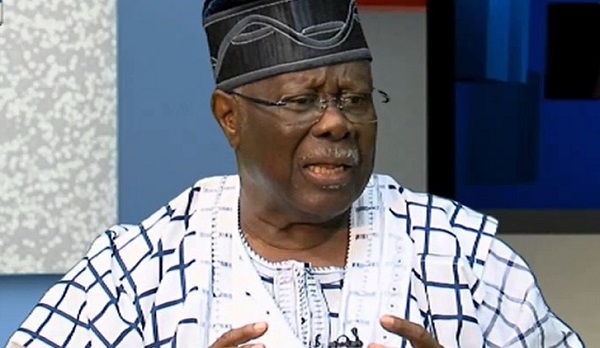 Former Deputy National Chairman of the Peoples Democratic Party (PDP), Chief Bode George, on Wednesday demanded the resignation of the party’s National Chairman, Iyorchia Ayu, over the current unrest in the party.

George, who made the call at a press conference in Lagos, also urged aggrieved members of the party to work for its success in the 2023 general elections.

The PDP has been rocked by in-fighting since the emergence of Delta State Governor, Ifeanyi Okowa, as the party’s vice-presidential candidate in June.

The perceived poor handling of the process which produced Okowa as the vice-presidential candidate split the party into two blocs, with a group backing the Rivers State Governor, Nyesom Wike, demanding the removal of Ayu over his role in the crisis.

George urged the former Senate President to fulfil his promise of resigning as the national chairman if a northerner emerges as the party’s presidential candidate.

He also expressed confidence that Wike would not dump the party for All Progressives Congress (APC).

The PDP chieftain said: “He (Wike) won’t join the APC because we all know his perception about the ruling party.

“In a democracy, we must talk, exchange ideas. We must agree and disagree without actually being disagreeable. Any organization with human beings will always have issues, but the ability to manage that crisis will be the determining factor.

“I want to appeal to all sides to sheathe their swords. Nigerians are waiting for us and we must convince them that we can manage the resources of the country in an equitable manner.

“They should all ceasefire. Statements of arrogance and innuendos that can destroy the party should stop forthwith.

“Zoning has sustained our democracy for this long because it’s the concept that established our party. My plea is that all should ‘cool temper’ because if we don’t get it right this time around, this nation will never forgive us. Nigerians are waiting for the PDP.

“My fear is that if the insecurity continues, who will be bold enough to campaign or cast votes during the election?

“These are serious issues we must consider. Are we thinking about it? It’s scary. How will people go out to vote on the day of the election?”