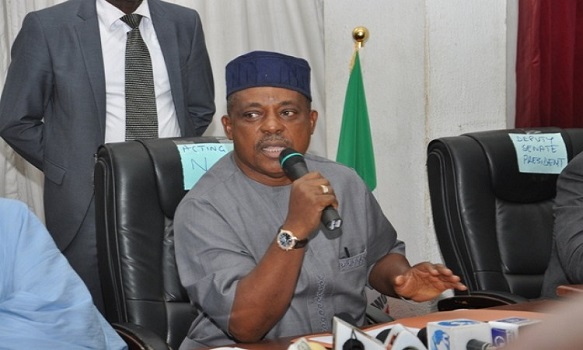 The Peoples Democratic Party (PDP) has called on the United Nations (UN) and the International Criminal Court (ICC) at The Hague to take judicial note of what they alleged as hate speech by President Muhammadu Buhari.

According to the PDP, Buhari was overheating the polity with his “boast by affirming and approving his violation of fundamental rights of Nigerians during his regime as military head of state.”

In a statement on Wednesday by its spokesperson, Kola Ologbondiyan, PDP said the president’s “inflammatory and anti-democratic comments” were “promoting state-involved violence, sectional bloodletting and resentment.”

It said the comments have also “exacerbated hatred, abuse of rights and brazen violation of our constitution and democratic order.”

The opposition party was reacting to the president’s statement on Tuesday while receiving members of the Buhari Support Organisation at the Presidential Villa.

The president said, “When I was in uniform, younger and rather ruthless, I got from President downward, I locked them up in Kirikiri. I said, you’re guilty except you prove yourself innocent.”

Said the PDP, “this statement contradicts the constitution and all tenets of democracy and justice across the world which holds all citizens innocent until proven guilty in court of competent jurisdiction.

“This particular hate speech by President Buhari has finally confirmed the underlining impetus behind the prevailing executive highhandedness, the trumped-up charges against the opposition, persecution of political opponents, flagrant disobedience to court orders, brazen harassment, arrests, molestations, illegal detention and extra-judicial execution of innocent Nigerians as already catalogued by the PDP and international bodies, including the United States Department of State.

“These include the horrendous bloodletting and killings in various parts of our country, particularly in Adamawa, Benue, Taraba, Kogi, Plateau, Nasarawa, Borno, Zamfara, Yobe, Abia, Anambra, among others.

“Furthermore, the world now know why appointees of President Buhari have continued to hold the institution of democracy, particularly the National Assembly and the courts, in utter disdain, in addition to the continuous harassment of federal legislators and intimidation of judicial officers.”

The party alleged that Nigeria was more divided under Buhari’s government and asked the UN and ICC “to note and condemn this as it is becoming a trend and a threat to the nation’s democracy.

“Nigeria has not been more divided than it is today under President Buhari and unguarded comments, which have continued to overheat the polity and set citizens against one another.

“The PDP therefore calls on the United Nations, the ICC, all lovers of democracy as well as all compatriots to join hands in condemning this trend that is now obviously threatening to truncate our hard-earned democracy and erode the freedom our people.”

The party said it will continue to stand with the people to work for the unity, cohesion and protection of all Nigerians irrespective of creed, ethnicity and political affiliations.