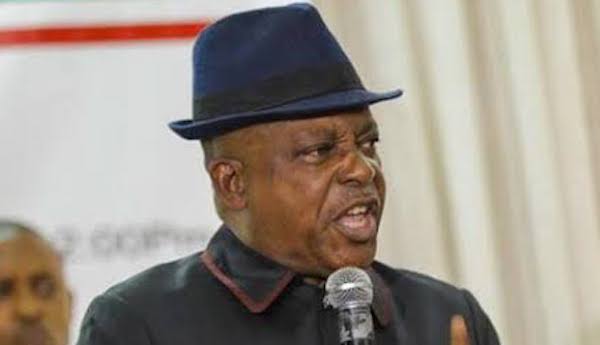 The Board of Trustees (BoT) of the Peoples Democratic Party (PDP) on Thursday, said it would ensure that the National Chairman, Prince Uche Secondus, and members of the National Working Committee (NWC) serve out their tenure which expires in December.

It also said the party would do everything necessary to take over power from the All Progressives Congress (APC) in 2023, noting that it was taking steps to resolve all disputes within the ranks of the PDP and unite it for the attainment of its objective.

Secondus has been having a running battle to retain his position in the party. There have been reported moves by some PDP governors to remove the national chairman as part of the permutations for the bid for power in 2023.

But the BoT said it would ensure this does not happen.

“The Board of Trustees will ensure that a fluent and uninterrupted operation of all the organs of the party, particularly the National Working Committee (NWC), remains in place leading up to a successful convention in December 2021,” the BoT said in a communiqué signed by its Secretary, Senator Adolphus Wabara.

It said it would ensure that harmonious relations exist between the organs of the party, adding that a detailed meeting between the BoT and the NWC is planned to hold soon.

It said it was working with other stakeholders to resolve disagreements among party members as a way of ensuring peace and stability in the main opposition party.

According to the communiqué, which was read to reporters by Wabara,, the BoT reviewed and discussed the situation of the party nationwide, stating that this was necessary due to the heightened political and economic tensions in the country.

The purpose of the meeting, Wabara said, was to ensure the stability of all the organs of the party and to place them on the alert as the party prepares to take over power once again.

The communiqué said the BoT recognised the ongoing work of the Reconciliation and Strategy Committee, led by a former Senate President, Senator Bukola Saraki.

“The meeting was briefed on the outcome of zonal congresses held over last weekend. Three out of the six congresses have been successfully concluded.

“The Board of Trustees in playing its statutory role as the conscience of the party will work earnestly towards ensuring that the highest level of morality exists in all its activities and that all the members of our party live up to expectation,” it said.

The communiqué added that the board is committed to not allowing any strained relationship between it members, particularly at the top management level of the party.

“With a determination to do all that is necessary to ensure that we fulfill the overwhelming desire of the vast majority of the people of Nigeria that the PDP regains national power in 2023, the board is unequivocally committed to ensuring that normalcy and peace prevail through all the organs of the party to permit the development and implementation of well-structured plans.

“Finally, the board is very appreciative of the commitment of our governors to the party and the exemplary roles they have all been playing to keep the party at the optimum operational level. The board will consult with the governors’ forum on necessary measures towards solidifying the party,” the communique read.

Commenting on the zoning of the presidency, a BoT member and former Deputy Senate President, Senator Ibrahim Mantu, said: “Zoning is in the PDP Constitution, it is a party matter.”

Another member and a former Minister of Foreign Affairs, Chief Tom Ikimi, however, said it was too early to discuss the matter.

“It is still too early for the PDP at this point in time to declare its position on zoning. You know very well that APC has done five years now; politics as far as Nigeria is concerned is between APC and PDP. PDP has to be very careful in dealing with this issue; we will take it step by step. I believe that your concerns will be taken into consideration when the decision will be made,” he said.