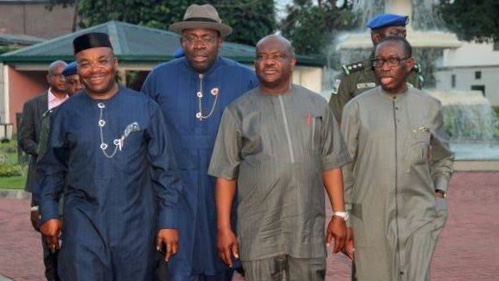 The Peoples Democratic Party Governors Forum, PDPGF, has accused the All Progressives Congress, APC, as the brain behind the rumoured retreat for returning and newly elected governors on the platform of the PDP in Dubai, United Arab Emirates.

Reports had emerged recently that the opposition party had fixed an induction and investment retreat for the returning and newly elected governor for 16 to 21 of May at Retreat Palm Dubai M-Gallery, UAE

The leadership of the PDP Governors Forum, in a statement by its Coordinating Consultant, Osaro Onaiwu on Wednesday, debunked the rumour, describing it as a fallacy orchestrated by the APC.

According to Onaiwu, the APC has failed to come to terms with the impressive results recorded by the PDP at the last general elections.

Calling on the general public to disregard the supposed retreat, the PDP Governors Forum, also asked the public to be “careful to avoid falling into fraudulent traps set up by the faceless organizers in their quest to deceive and manipulate innocent members of the public.”

Onaiwu also stressed that at the appropriate time, the forum will organize its retreat for governors elected on the platform of the party, adding that “no matter the circumstances, the venue of the retreat will be within the territorial borders of our dear country.”