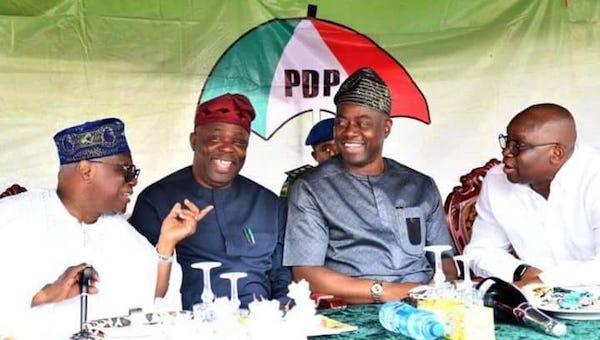 Leaders of the Peoples Democratic Party (PDP) in the South-West met in Ibadan on Friday and resolved to reposition the party.

The meeting which was held at the Government House, Agodi, Ibadan, was attended by Oyo State Governor, Seyi Makinde, former Osun State governor, Prince Olugunsoye Oyinlola, and the Deputy National Chairman of the PDP, Elder Yemi Akinwonmi, who presided over the meeting.

Also in attendance were two former governors of Ekiti State, Ayo Fayose and Segun Oni, former Deputy National Chairman of the PDP, Chief Olabode George, members of the National Assembly and other stakeholders.

In a communiqué issued at the end of the meeting, the leaders agreed to work together and ensure the party remained a “strong and indissoluble structure.”

They also charged all the party stakeholders to embrace the principles of equity and fairness in the distribution of positions due to the zone henceforth.

The communiqué read: “The Leaders of the PDP South-West, from the six states of Lagos, Ogun, Ekiti, Ondo, Oyo and Osun met today, June 19, discussed extensively on various issues bordering on the unity, oneness and togetherness of the South-West-PDP and resolved as follows:

“That the PDP South-West should remain an indivisible, united and strong entity under the PDP’s umbrella.

“That positions zoned to the South-West should, henceforth, be fairly and equitably shared within the various states/sub-zones of Lagos/Ogun, Ekiti/Ondo and Oyo/Osun to create a sense of belonging in the respective States/Sub-zones.

“The above-mentioned resolutions of the meeting are intended to create a sense of belonging, fairness, justice and unity and will be fully implemented as we progress in our programmes in the future to come.”