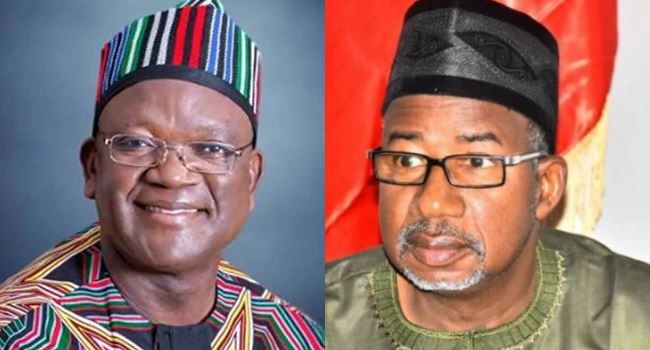 The Peoples Democratic Party (PDP) has waded into the war of words between two of its governors, Samuel Ortom of Benue State and Bala Mohammed of Bauchi State.

Ripples Nigeria reports that the two governors have been at each other’s throats over their differing positions on the Fulani herdsmen crisis ravaging the country.

Mohammed had fired the first shot, accusing the Benue governor of criminalizing the entire Fulani race in the country and that his actions had led to the worsening of the farmers/herdsmen clashes in the country.

Ortom on his part, while expressing disappointment with Mohammed’s comments, including alluding to the fact that herdsmen carries AK-47 in self-defense, said on Monday that he is beginning to think that the Bauchi State governor is part of the Fulani terrorists that are terrorising the country.

However, in tweets on Monday on its official Twitter handle, @officialPDPNig, the main opposition party called for calm, saying the party had waded into the feud.

The party tweeted: “@OfficialPDPNig assures that it has waded into the rift between Bauchi State Governor, Senator Bala Mohammed, and his Benue State counterpart, Governor Samuel Ortom.

“The PDP calls for calm as the internal reconciliation mechanism introduced by the hierarchy of the party between the two governors subsists.

“The PDP however urges the Federal Government to take urgent steps to address the escalated security challenges in our country.”