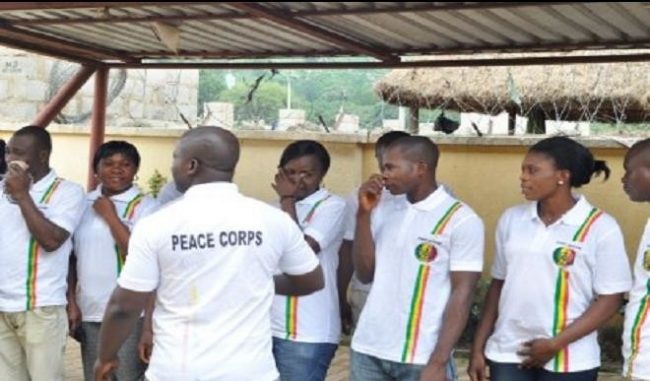 The Peace Corps of Nigeria has reacted to President Muhammadu Buhari’s decision to withhold assent to a bill ratifying its paramilitary agency status, alleging “conspiracy against Nigerian youth”.

The president Tuesday withheld his assent to the Nigerian Peace Corps (Establishment) Bill passed by the National Assembly in 2017.

In a letter read by the Speaker of the House of Representatives, Yakubu Dogara, Tuesday, Buhari gave reasons why he would not assent the bill.

Read also: Despite Dapchi debacle, Buhari insists B’Haram has been stopped ‘in its track’
He cited security concerns and financial implications amongst reasons for his decision.

Speaking to journalists at the National Assembly following the development, the commandant of the corps, Dickson Akoh, said the president’s decision was expected.

“Let me tell you, on 15th of January, the same security agencies that opposed the bill went to Mr. President and told him that instead of voting money to create a new establishment, they should use it to improve the efficiency of their own activities”, he said.

“For me, whatever I’m doing is in the interest of the vast majority of Nigerian youths.

“From what I’m seeing, there is a conspiracy against Nigerian youth,” he said.

Akoh said the security agencies had vowed, after the passage of the bill by the National Assembly, to do everything to prevent the president’s assent.

“We have bills like this that suffered the same setback but eventually became a reality.

“We are consoled by the due process of the law and we know that one day, attention would be given to the bill.

“Building an institution takes a gradual process that we ought not to be in a hurry.”

The headquarters of the Peace Corps has for about a year been under seal by the Nigeria Police.

Despite two court orders, the police have said they will keep the facility shut in the “interest of national security and public safety.”

The police and other established security agencies, including the State Security Service, have repeatedly resisted the Peace Corps’ attempts to become a paramilitary agency. The corps is currently a registered non-governmental organisation.