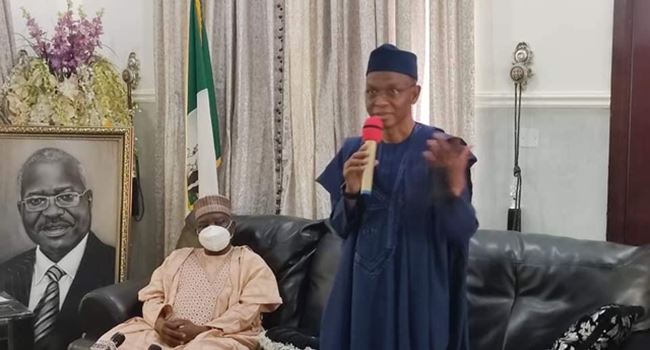 The governments of Plateau and Kaduna States have resolved to set up a joint task force to tackle insecurity in the two states.

This resolve was reached by Kaduna State Governor, Malam Nasir El-Rufai, and his Plateau State counterpart, Simon Bako Lalong, on Sunday, when El-Rufai paid a condolence visit to Lalong following the recent crises leading to the killing of many residents in some parts of the state.

The two governors also promised to collaborate with Operation Safe Haven (OPSH) and other security agencies to tackle the current security challenges bedeviling the two states.

At the meeting, El-Rufai said:
“Plateau and Kaduna are not just neighbours. We have a strong relationship and since we came into office in 2015, Governor Lalong and I have been consulting each other.

“It was Governor Lalong that introduced us to Centre for the Humanitarian Dialogue, an international NGO that is involved in peace building.

“It was Governor Lalong who introduced the idea that the two states should establish peace building agencies.

“Plateau has Peace Building Agency and Kaduna has Peace Commission, we have been working together because we realise that our two states are too diverse and homes to many people across Nigeria.

“Unless we promote peace and peaceful co-existence between the various people, it will not only affect the two states but the entire country.

“In the case of the recent crisis between the Irigwe and the Fulani, we have Irigwe in Kaura Local Government in Kaduna State.

“We also have Ganawuri and Atakar in parts of Southern Kaduna State; we are the same people and we must work together and unite our people to live in peace.”

Lalong, who was represented by his Deputy Governor, Prof. Sonni Tyoden, said the synergy between the two states would curb security threats that confronts them.