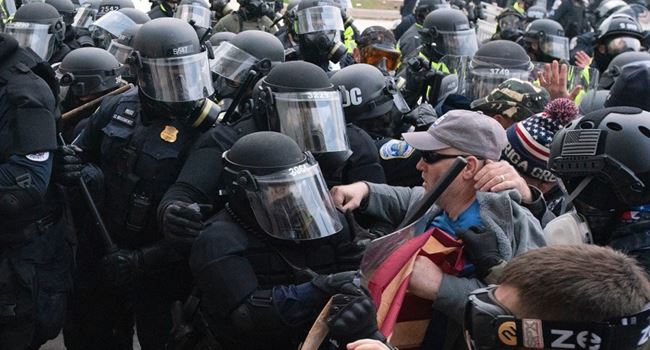 The United States (U.S) Capitol Police on Thursday, announced that one of its officer is dead.

The U.S. Capitol Police officer, Brian D. Sicknick, died at around 9:30pm on Thursday night, after sustaining various degrees of injuries at the pro-Trump riot in Washington, D.C. on Wednesday.

It was gathered that at least four civilians also died, including three people who suffered medical emergencies and one woman who was fatally shot by police.

This disclosures was made in a Statement by the US Capitol Police on Thursday night.

Read also: US has no right to sanction nations after Capitol invasion, Zimbabwe president says

According to the Force, Sicknick “was responding to the riots on Wednesday, January 6, 2021, at the U.S. Capitol and was injured while physically engaging with protesters.

“He returned to his division office, collapsed and was taken to a local hospital, where he succumbed to his injuries and died at approximately 9:30pm on Thursday night.”

The Capitol police assured that his death will be investigated by the Metropolitan Police Department’s Homicide Branch, Capitol Police, and federal partners.

Officer Brain Sicknick, who joined the US Capitol Police (USCP) in 2008, was a 12-year veteran of the force until his death.