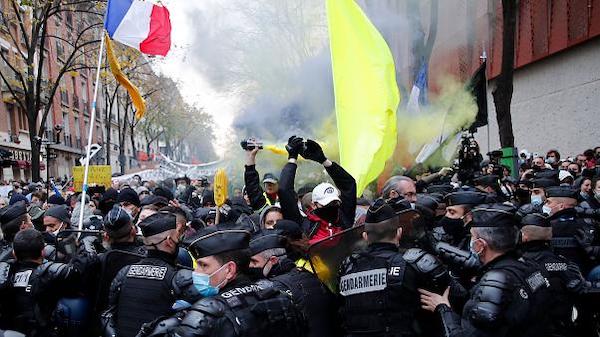 French police have arrested no fewer than 100 protesters who were demonstrating against a proposed new security law in the country.

Reports on Saturday revealed that police officers waded into the crowds of several thousand to haul away suspected troublemakers as the protests turned tense in the capital of France.

Slogans on placards carried by marchers in Paris said “I will never stop filming” and “Camera equals mutilation?”

There were also protests in other cities. In Lyon, in the southeast, authorities reported five arrests among people they said attacked police and sought to loot shops.

Demonstrating in Montpellier, southern France, 49-year-old doctor Anne-Marie Briand said she considered her “duty as a citizen is to ensure respect for our rights”.

She carried a banner reading “a blurry cop is a dodgy cop” – referring to the law’s ban on publishing images that allow an officer to be identified where the intention is to cause the officer “physical or psychological harm”.

Related Topics:Parisprotesterssecurity bill
Up Next