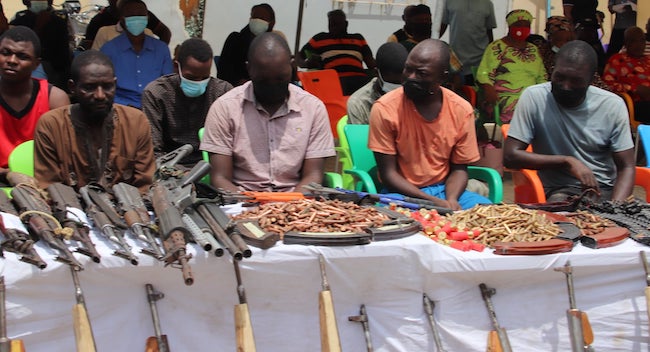 Police operatives have arrested 84 suspected criminals in various parts of the country.

The Force Spokesman, Frank Mba, who paraded the suspects at the Force Headquarters in Abuja Wednesday, said the suspects were found in possession of 45 sophisticated firearms and ammunition.

According to Mba, some of the suspects were from Mali and Niger.

He said they were arrested for their alleged involvement in terrorism, banditry, kidnapping for ransom, possession, and proliferation of illegal weapons, armed robbery, and unlawful production of vehicle number plates among others.

“The suspects include a four-man notorious criminal gang responsible for carrying out some of the high-profile kidnap for ransom operations in the Federal Capital Territory (FCT), Kaduna, Niger, Katsina, Bauchi, and Plateau States.

“Investigations revealed that the suspects were at an advanced stage of operationalizing their plans to kidnap a Catholic Bishop in Zaria when they were apprehended by the police.

“The police team also arrested a seven-man criminal syndicate that specializes in the manufacturing and supplies of locally fabricated AK-47 rifles and ammunition to bandits in forests along the Kaduna-Abuja expressway and Funtua – Kankara expressway in Katsina State,” the Force spokesman stated.