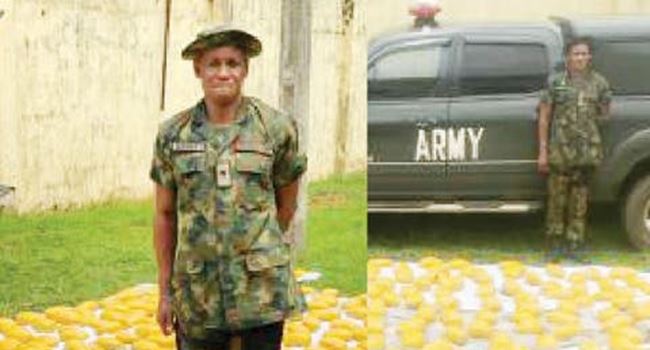 The Delta State Police Command on Monday announced the arrest of a fake soldier, Fabian Ojumah, on the Sapele/Benin Road with 420 wraps of weed suspected to be Indian hemp.

The spokesperson of the police in the state, DSP Onome Onovwakpoyeya, disclosed this on Monday, adding that the suspect was caught in a fake army van.

“The suspect is not a real army officer. He was caught with 420 wraps of Indian hemp; where he was taking them to is not specified but, investigation is ongoing”, Onovwakpoyeya stated.

Ojumah, 44 and a native of Abbi, according to the police spokesperson, had claimed to be a Major in the Nigerian Army when he was quizzed by the personnel of the Operation Safer Highways’ patrol team.

The fake military van, with plate number NA142- B01, used in conveying the 420 packs of compressed Indian Hemp, was recovered from the suspect.

The PPRO added that though Ojumah grew up in the barracks, he was never a soldier.