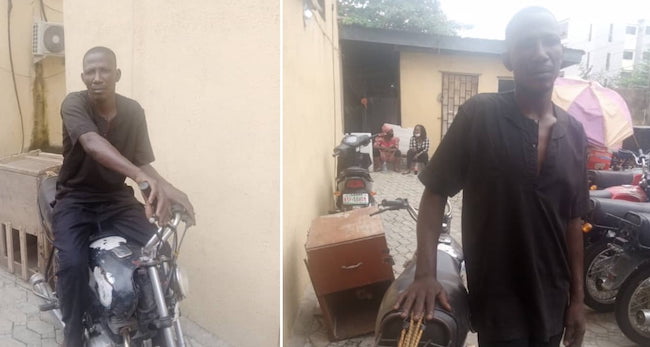 Police operatives in Lagos have arrested a man who allegedly stole a motorcycle from a police post in Mushin during last year’s #EndSARS protests in the state.

The spokesman of the state police command, Olumuyiwa Adejobi, who disclosed this in a statement on Thursday night, said the suspect, Yusuf Saliu, was arrested on Monday.

The spokesman said the motorcycle with Reg No. APP 476 Q was stolen at the Daleko area of Mushin during the protest, adding that it was one of the several bikes stolen by hoodlums at the time.

According to him, Saliu was arrested based on his alleged involvement in the vandalization of the Daleko police post.

He said the suspect was seen riding the motorcycle.

Adejobi said: “The police operatives attached to Mushin Division of the Lagos State Police Command have arrested one Yusuf Saliu, m, 32, at Daleko Area, Mushin, with one of the suspected stolen motorcycles at the Dalemo Police Post during the October 2020 violent #ENDSARS protest in Lagos State.

“The suspect was arrested on 22nd March 2021 at about 9:30 p.m., based on an intelligence on the activities and involvement of the suspect in the vandalization of the Daleko Police Post.

“The said bike has been recovered and the matter has been transferred to the Command’s Special Squad for further investigation on the order of the Commissioner of Police, Lagos State, CP Hakeem Odumosu.”