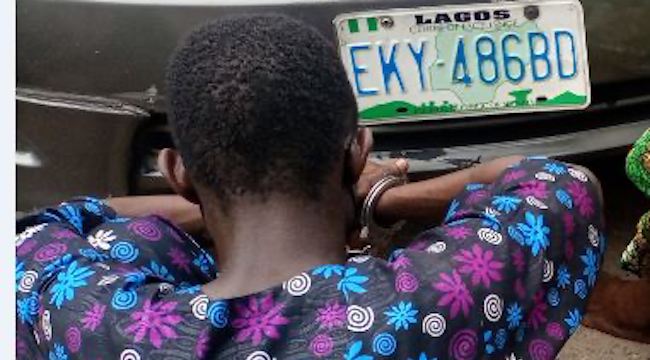 Police operatives in Lagos have arrested a 41-year-old man, Sikiru Kolawole, with fresh human parts in the Ikorodu area of the state.

The state’s Commissioner of Police, Hakeem Odumosu, who paraded the suspect at the headquarter of the state police command in Ikeja, said a knife used to severe the corpse body parts including wrists, heart, and flesh was recovered from the suspect.

He added that the suspect would be arraigned in court at the end of investigation.

Kolawole told journalists that the human parts belonged to a male corpse exhumed from Sabo cemetery in the area.

He added that an Islamic cleric asked him to get the parts as one of the requirements for the money ritual.

He said: “ My business has not been moving. When I complained to a friend, he directed me to Alfa who told me to get some human parts. Upon inquiry, I was told I could get fresh human parts at the cemetery.

“I went to Sabo cemetery along Igbogbo road, Ikorodu, dug a fresh grave and severed the needed parts which were the heart, two wrists, and flesh, from a male corpse.

”I was accosted by policemen while taking the body parts to the Alfa.”