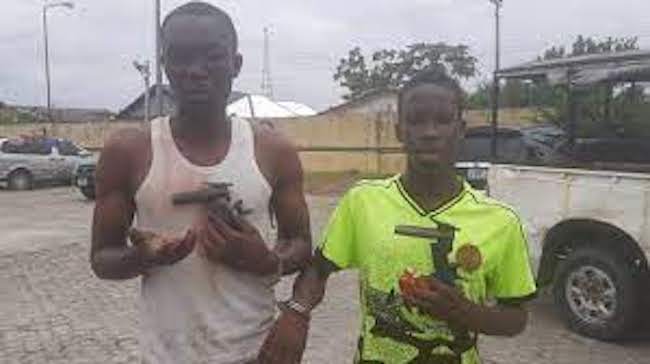 Police operatives in Bayelsa have arrested two suspected armed robbers in the state.

The spokesman of the state police command, Asinmin Butswait, who disclosed this in a statement on Thursday, listed the suspects as Abraham Kalizibe and Abadi Prosper.

He said Prosper is the gang’s armourer in whose custody two locally-made pistols and five cartridges were recovered by the police.

The spokesman said the duo were arrested following a tip-off by members of the public.

Butswait said: “Kalizibe is a member of a notorious armed robbery gang terrorising Yenagoa and its environs.

“During interrogation the suspect confessed to series of armed robbery operations and later led police detectives to the gang’s armourer where two locally-made pistols and five cartridges were recovered.

“The suspects are currently undergoing interrogation and would soon be charged to court upon conclusion of the investigation.”