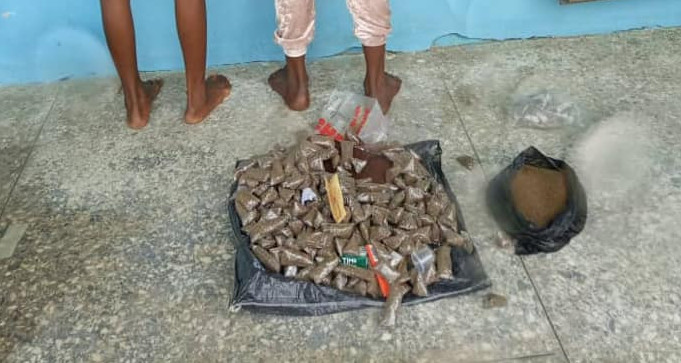 The acting spokesman of the state police command, DSP Edafe Bright, disclosed this in a statement on Sunday in Warri.

Bright said the suspects identified as Elo Edinburh and Joy Edinburh were arrested by a surveillance team attached to the Crack Squad, Asaba, at Ozoro community on August 5.

He said: “On August 5, 2021, at about 2030hours, the surveillance team attached to Crack Squad, Asaba, raided the hideout of suspected drug dealers in the Ozoro community.

READ ALSO: Police arrests dismissed soldier, one other with 1,200kg of indian hemp in Lagos

“Two suspects – one Elo Edinburh and Joy Edinburh, were arrested during the raid.

“Exhibits recovered from them include 700 wraps of substance suspected to be Indian hemp, 29 wraps of Loud and one packet of Loud.

“Others are 33 ties of cocaine ice, six pieces of moly hard drugs, two sachets of tramadol, 13 capsules of Swinol and 14 packets of Rizlers.”