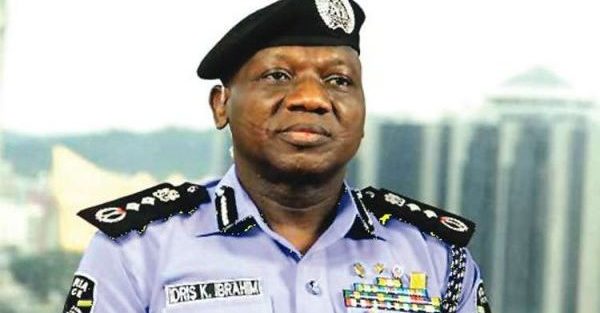 The Inspector General of Police (IGP), Ibrahim Idris, Wednesday apologised to the people of Benue State over his much-criticized controversial comment describing the killings in the state as being the result of “communal crisis.”

IGP Idris, while apologizing for the statement, said it was misconceived.

Tendering the apology, the IGP said, “honestly as a persons I want to apologize for the misconception of the statement I made at a press briefing I made in Abuja.

“What I tried to convey in that statement is that we should live together and regard each other as our brothers’ keepers and also ensure peaceful coexistence.

“Irrespective of where you come from, we should be seen as one people who should live in peace and love for one another.

“So in essence my statement should not be seen or regarded as my support for anyone but must be seen to be an advice for the greater unity of our country”.

The IGP assured that enough personnel and equipment had been deployed to the state to stop the killings and ensure the return of peace and order in the state.

Earlier, Governor Samuel Ortom had hinted that over 73 bodies had so far been recovered from the crisis zones in Logo and Guma local government areas constituting mainly of women and children.

He lamented that the leadership of Miyetti Allah Kautal Hore were still walking the streets free despite masterminding the invasion and killings in the state.

He added that “If police man can be killed just like that and there weapons taken away by these people in Logo, where are we going to in this country. IGP that is a major challenge for you, I know that your weapons cannot be taken away just like that we expect that the you must go after this people.”

“Even in my council ward, Nzorov in Guma they attacked again but the soldiers repelled them.

“I must state that Nigeria is passing through serious security challenges, I pray we don’t get to the level that our people resort to self defence. Because when people are not sanction for their lawlessness, anarchy and confusion would set in and nobody will be safe.

“The grazing law we made in Benue state is for the collective interest of all, irrespective of where you come from and it has come to stay.”

Read also: FG still undecided on whether or not to deploy troops to Benue- Lai

Also speaking, the paramount ruler of Tiv tribe and Chairman of the Benue state Council of Chiefs, His Majesty Professor James Ayatse, said the killings in the state by herdsmen was not about grazing or the law but an agenda.

“Before this crisis, all the herdsmen in Gboko disappeared creating the impression that they had foreknowledge of the attacks and killings.”

Speaking on behalf of the Civil Siciety Organization, Josephine Habba, lamented that the attitude of President Buhari to the killings in Benue which had created an impression that the state was not regarded as part of the country.

“We must sound it clear that if the government cannot protect us we may resort to self help and the constitution allows us the right to defend ourselves.

“If the President cannot come here to sympathies with Benue people, he should also not come to Benue to campaign for the 2019 election.”

Representing the clergy, Reverend Father Solomon Mffa appealed to President Buhari to “speak to the conscience of your people because you understand each other better in order to put a stop to the senseless killings of Nigerians and Benue people in particular.

“You know the language of the herdsmen, speak the language and ask them to stop these killings. Also teach these people to respect the sanctity of human lives.”

Also speaking, Chief John Antenyi, the Odejo ‘K Apa and paramount ruler of Apa local government, said the proposed establishment of cattle colonies was another plot by herdsmen to colonise parts of the country.

“We must embrace ranching because it is the global practice and it will entrench peaceful coexistence among the farmers and herders alike.

“We are also calling on the IGP to disarm all herdsmen in the country to stem the dastardly killings being perpetrated in parts of the country by herdsmen”.

Women representative who is a former commissioner in the state, Rebecca Apedzan, urged President Buhari to draft in soldiers to tackle the menace of herdsmen in the state, adding, “if soldiers can be drafted to the South East to stop IPOB agitation why can’t the government do same to stop herdsmen?”

On his part the Speaker of the State Assembly, Terkimbi Ikyange, said the grazing law in the state passed through due process after the people had agitated for it, stressing that all segments of the state including herdsmen also contributed to its making. He maintained that the law would never be reversed.

Retired Justice Augustine Utsaha who also spoke, noted that the integrity of the President was being questioned as result of his silence and indifference to the activities of herdsmen in the country, advising him to redeem his image and integrity by moving against the masterminds of the Benue killings.