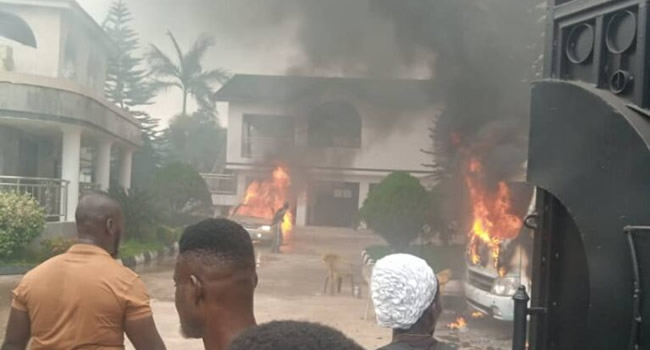 The Imo State Police Command has confirmed that three security operatives were killed in the attack by gunmen, on the country home of the state governor, Hope Uzodinma, at Omuma in the Oru East Local Government Area of the state, on Saturday.

Ripples Nigeria had reported that some gunmen in the morning of Saturday, attacked the governor’s home, and set part of it on fire.

The Police Spokesperson in the state, Orlando Ikeokwu, confirmed that a police sergeant and two personnel of the Nigeria Security and Civil Defence Corps (NSCDC) were casualties in the attack.

According to Ikeokwu, the gunmen killed one NSCDC operative in the governor’s compound, while the other NSCDC personnel and a police sergeant were killed by the attackers at Mgbidi- Oguta junction, while escaping from the compound.

The spokesperson also said that two cars parked in the governor’s compound were burnt during the attack, noting that the invaders used petrol bombs to set the compound on fire.

“However, one unarmed personnel of the NSCDC was killed in the process. The hoodlums while escaping also killed a Police Sergeant and another NSCDC personnel both in their private vehicles at Mgbidi junction.”

The many lies of actor, Uche Maduagwu, to get noticed may trigger the end of his career