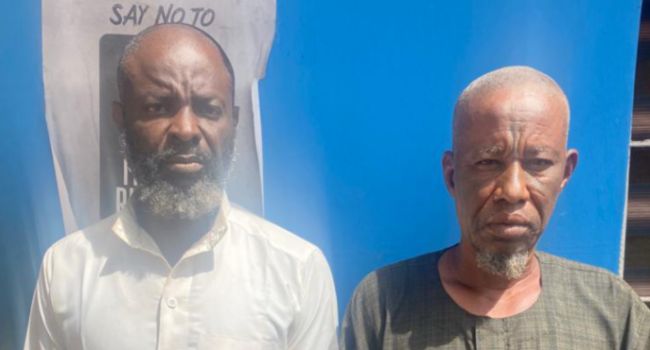 The Ekiti State Police Command has confirmed the arrest of a herdsman who allegedly kidnaps and kills his victims after collecting ransom from their families.

The State Police spokesman, DSP Sunday Abutu, who confirmed the arrest of the suspect, Abashe Adamu Idris along with an accomplice, Ibrahim Mumini Toyin, in a statement on Sunday, said the kidnap kingpin was arrested in Ido-Ekiti in Ido-Osi LGA of the state, by operatives of the state Rapid Response Squad.

Abutu said the suspects were allegedly involved in the high profile abduction of victims in the state and after collecting ransom running into millions of naira from the families of the victims, they would kill the victims and dispose of the bodies.

The police image maker added that Idris would then use the alleged ransom collected from family members of his victims to buy more cattle and increase his herd.

“The duo of Abashe Adamu Idris and Ibrahim Mumuni Toyin have been involved in high profile kidnappings in different parts of Ekiti State and beyond.

“They would kill their victims after collecting ransom from the families and use the proceed to buy more cattle to increase their herd, making people believe they were honest and hard working herdsmen.

“The duo and others at large including Idris’s children coordinated numerous high profile kidnappings in Ekiti including the kidnapping of one Adeeko Ademola and Nasiru Salisu at Adamsy Sawmill, Aisegba-Ekiti,” Abutu said.

He added that they were apprehended by “some local vigilantes working with the RRS who acted on intelligence which led to the arrest of the culprits.”

“The culprits confessed to the crimes when interrogated. During interrogation, Ibrahim Mumini Toyin confessed to the commission of the crime and claimed that the dastardly act of kidnapping and murder of one of the two victims was carried out by himself and four others who are children of Alhaji Abashe Adamu Idris and are currently at large.

“Ibrahim Mumini Toyin disclosed that his own share of the ransom allegedly paid was used to purchase cattle for him by Alhaji Abashe Adamu Idris.

“The suspects are in our custody undergoing interrogation and will be arraigned in court after the conclusion of investigation,” he promised.