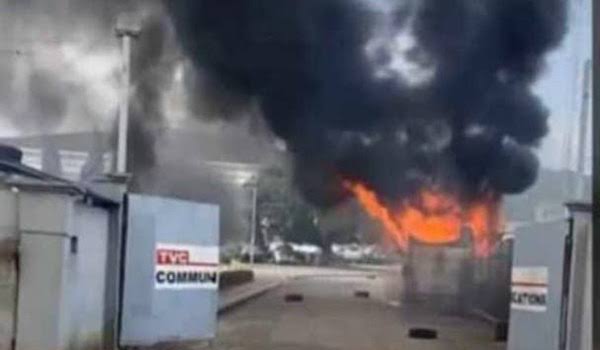 The Lagos State Police Command said on Wednesday hoodlums masquerading as #EndSARS protesters had killed two policemen in the state in the last two days.

The command’s spokesman, Muyiwa Adejobi, who disclosed this in a statement, added that at least 10 police divisions were attacked by the hoodlums.

Adejobi also revealed that two patrol vans were set ablaze by hoodlums in Ojo and Ajegunle areas of the state.

He said: “Similarly, the hoodlums attacked three new generation banks on Tuesday, October 20, and Wednesday, October 21, 2020, and carted away an unspecified amount of money, while some parts of the banks were set on fire before they were dislodged. Some of them were arrested with the loots from the banks, including arms and ammunition.

“In the Ajegunle area, they burnt the secretariat of Ajeromi Ifelodun local government area and some valuables, including cars, and other private medical and commercial centres were attacked.

“Today, Wednesday, October 21, 2020, the hoodlums again launched a series of attacks on many facilities within Lagos State, such as the palace of the Oba of Lagos, Shoprite Ajah, Nigerian Ports Authority head office, Marina, the governor mother’s house at Akerele, VIO/Federal Road Safety Corps’ offices at Ojodu, magistrates’ courts, Igbosere, TVC station, the Nation Newspapers office, and many other shops/malls were looted.

He, however, said four people were injured while several others lost their lives in the incident.