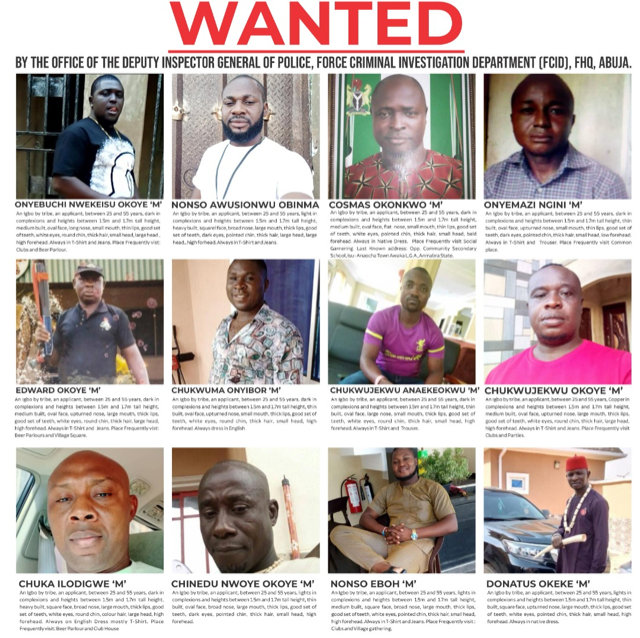 The Nigeria Police has declared twelve people wanted in connection with killings in Isu-Aniocha local government of Anambra State.

This followed an order granted by the court to declare all the suspects, who were of Igbo extraction, wanted.

A statement by CSP Olumuyiwa Adejobi, Force Public Relations Officer (PRO) on Friday, said these persons were declared wanted in relation to “a case of conspiracy, murder, armed robbery, act of terrorism kidnapping, cultism and unlawful possession of firearms, malicious damage and conduct likely to cause breach of public peace in the local government.”

The said suspects were found allegedly indulging in criminal acts ranging from killing of innocent people and vandalism of properties worth N1.2 billion naira.

They also allegedly launched attack on mobile policeman stationed at the community to restore calm.

The Nigeria Police, thus, sought the support of Nigerians in ensuring that the enlisted suspects were apprended.

“The Nigeria Police urges all well-meaning members of the public to assist police with useful information which would facilitate the arrest and ensure they are brought to justice.

“It further assures that justice would not just be done in the matter, but would be seen by all parties in the matter, to have been done as the police will leave no stone unturned in unravelling the ugly and criminal incident”, the statement added.