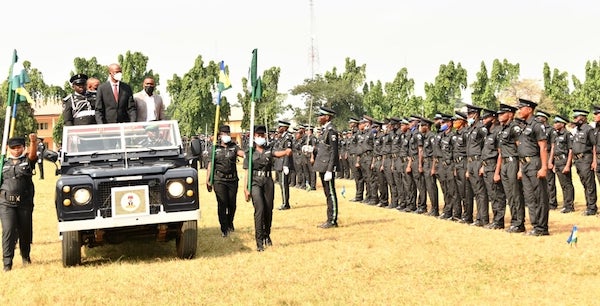 The government said in a statement that the officers which had their passing-out parade at the Police College, Ikeja, would boost community policing in the state.

The event was attended by the Lagos State Governor, Babajide Sanwo-Olu.

The governor, who was represented at the passing-parade, appealed to people of the state, especially community leaders and associations to cooperate with the officers.

He assured the police constabularies that his administration would support them to carry out their assignment most efficiently and effectively.

Sanwo-Olu said: “The issue of security and safety of lives and property has been a major source of concern, which requires deliberate and urgent attention by the government, and the cooperation of all citizens.

“In an attempt to address this challenge, there was a national consensus on the need to embrace community policing which has been identified as a potent strategy that will complement the efforts of the Nigerian Police Force to effectively combat crime and criminal activities.

“I want to appeal to all Lagosians especially community leaders and associations to support this initiative by cooperating with these officers. They are no strangers but people that are known to you within your community. Let us, therefore, embrace this initiative to improve the security and safety of lives and property within our various communities.”

He also implored the officers to operate within the operational guidelines that had been given to them by police authorities.

The Inspector-General of Police, Muhammed Adamu, warned the officers not to see themselves as conventional police officers.

Buhari thanks China for rail, road projects in Nigeria, says no sustainable development without infrastructure