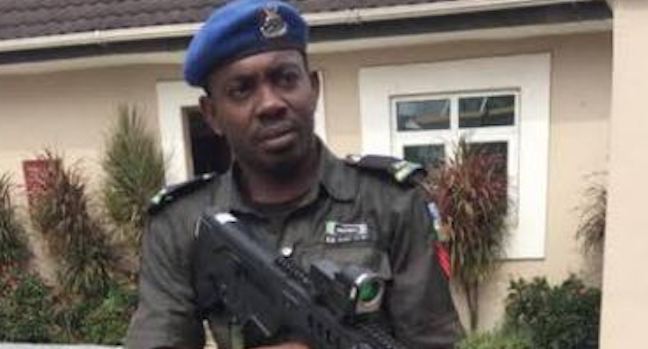 The Nigeria Police Force has dismissed a police sergeant, Eze Aiwansoba, who shot his estranged girlfriend in October last year.

The lady, Joy Ndubueze, reportedly ended the relationship with the police officer who is attached to the Special Protection Unit, Base 16, Ikeja, Lagos, over alleged battery.

He shot the young woman during a disagreement at Ikeja bus stop on the day of the incident and fled the scene.

The police sergeant was later arrested and subjected to Orderly Room Trial at the State Criminal Investigation Department (SCID) Yaba, where he was found guilty by a team of investigators at the facility.

The Spokesman of Lagos State Police Command, Olumuyiwa Adejobi, disclosed this in a statement on Monday.

He said: “The Commissioner of Police, Lagos State, CP Hakeem Odumosu, ordered the orderly room trial of the suspect where he was found guilty and recommended for dismissal. The approval for his dismissal was contained in a letter numbered PC. 458465/LS/DFA/2, dated February 2, 2021.

“After his dismissal, ex-Sergeant Eze Aiwansoba, was transferred to the State Criminal Investigation Department for prosecution via letter numbered AR:3100/LS/SPM/Vol.2/311 dated February 3, 2021.

“The State CID had written a letter to the Director of Public Prosecution, Lagos State, for legal advice which was eventually replied. It noted that the sergeant should be charged to court for attempted murder contrary to Sec 230, Criminal Law of Lagos State, 2015. The ex-sergeant was charged to Magistrate Court, Yaba, on February 9, 2021, with attempted murder of Joy Ndubueze; and the case is still on.

“The Commissioner of Police, Lagos State, CP Hakeem Odumosu, has therefore assured the general public that no erring police personnel would go unpunished as the command will not condone any act of criminality and unprofessionalism in all areas.”