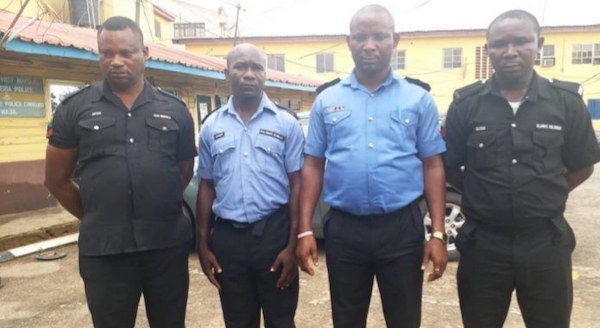 The erring officers were also charged to court for prosecution.

It was gathered that the policemen, who had disarmed the suspects of a locally- made gun and cartridges they used in attacking their victim, took them to a commercial bus and suddenly shot them in a video that surfaced online.

The team was immediately arrested and subjected to orderly room trial on the instruction of the Commissioner of Police, Zubairu Muazu.

A statement by police spokesman, Bala Elkana, a Deputy Superintendent of Police (DSP), the policemen were found culpable, dismissed and then charged with conspiracy and murder before an Ebute Metta Magistrates’ Court.

Elkana added that they were subsequently remanded in prison custody pending legal advice from the Directorate of Public Prosecution (DPP).

He said: “The policemen were subjected to internal disciplinary proceedings at the Provost Department. They were tried on three count charges bothering on discreditable conduct; unlawful and unnecessary exercise of authority and damage to article.

“The four policemen were found guilty and awarded the punishment of dismissal from service and prosecution. They were subsequently handed over to Homicide section of the State Criminal Investigation and Intelligence Department (SCIID) Yaba for prosecution in conventional court.

“The four suspects ex-Inspector Fabiyi Omomayara, ex-Sergeant Olaniyi Solomon, ex-Sergeant Solomon Sunday and ex-Corporal Aliyu Mukaila were on August 22 arraigned in Magistrate Court 5 Ebute Meta for conspiracy and murder and were remanded in Ikoyi prison. The case is adjourned to September 29 for DPP advice. This will serve as deterrence to others.”