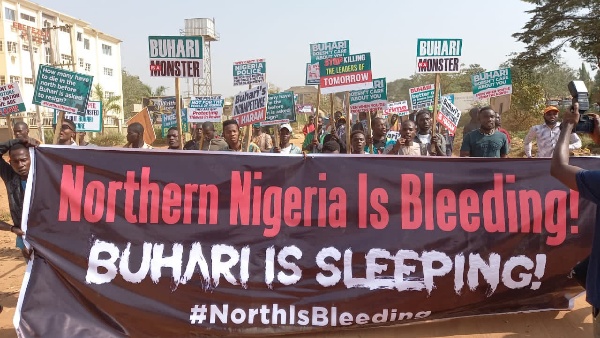 The #NorthIsBleeding protest which erupted in response to recurring banditry and insecurity was on Wednesday disrupted by the Nigerian Police in Abuja.

Ripples Nigeria gathered that the disruption led to the arrest of two protesters and two journalists with Roots TV.

The protesters had staged the massive protest at the Nigerian Labour House popular known as Ayuba Wabba House, Central Area.

They also charged labour leaders to join in the campaign in demanding an end to the killings going on in the northern region.

Nonetheless, the police disrupted the peaceful rally as protesters were about to terminate the protest under the Area 1 bridge.

Two protesters were allegedly beaten to a stupor in the process and whisked into a Hilux van.

Also, the crew from Roots TV including a cameraman, Tosin, and a reporter, Precious and the driver were arrested while covering the protest.

They were reportedly taken to the FCT Police Command.

Earlier on Tuesday, a former Vice President, Atiku Abubakar revealed the reason for the protests amongst the Northern youths.

He said via a Facebook post, “The #NorthIsBleeding because we’ve been complacent. We need to wake up from our slumber and collectively acknowledge that we face an existential threat. We must never be shy of speaking about our challenges and then engaging to solve the problems.

“To #SecureNorth, we need a leadership direction that will mobilise all hands on deck.”