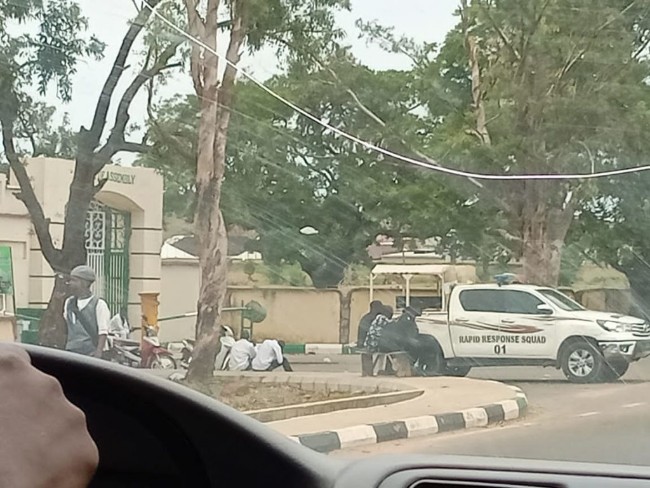 A group of yet to be identified suspected political hoodlums late Sunday night attempted to set the Bauchi State House of Assembly complex on fire as the leadership crisis rocking the Assembly heightened.

Information gathered at the Assembly revealed that the persons numbering more than 50 forced their ways into the gate at about 11pm on Sunday burning tyres and other objects with the intention of setting the complex on fire.

A source told our Correspondent that the security men on guard tried to prevent them from getting to the complex and raised alarm before armed security personnel arrived to disperse them.

Confirming the development, SpecialPolice foil hoodlum’s attempt to raze Bauchi Assembly, as leadership crisis heightens Liaison to Bauchi state Governor, Sani Mohammed Burra said that, “Some unknown persons last night had attempted to burn the Hon. House Complex as a result of which the security persons have taken over the place to avoid breakdown of law and order”.

He added that, “Immediately I was contacted, I informed the State Commissioner of Police on behalf of the State Government for necessary and prompt action. He too immediately mobilized personnel to the complex to ensure that no damage is done”.

The Special Adviser further said that, “As you are aware, the crisis is that of the leadership of the House, not against the Executive. We are trying to pacify the 22 Lawmakers to wait for their colleagues who are presently on pilgrimages to Saudi Arabia and Israel before they will do whatever they want to do”.

Sani Burra assured that the Executive was not in any way interfering in the internal problems of the Legislature but just doing everything to ensure that peace prevails saying, “the relationship between the Executive and the Legislature is very cordial and it will remain so. As soon as the Governor comes back, he will seat with them to amicably resolve the issue”.

Meanwhile, the 22 aggrieved members of the Assembly have vowed that there was no going back on their resolve to remove the present leadership if they refused to honorably resign from office as demanded.

One of them who spoke to our Correspondent on Monday said that already they have selected new leadership to be headed by one of them whose name he refused to mention until according to him, they gain entrance into the hallowed Chambers of the Assembly any moment from now.

Recall that last Friday, 22 aggrieved members of the State House of Assembly passed a vote of no confidence on leadership of the Assembly threatening to impeach them if they refused to honorably resign from office.

All efforts to get confirmation of the situation officially from the State Police Command failed as the PPRO of the Command, SP Ahmed Wakili neither picked up the phone nor replied to SMS and whatsapp messages sent to his mobile phone number.

No examination on Sallah Day – NECO