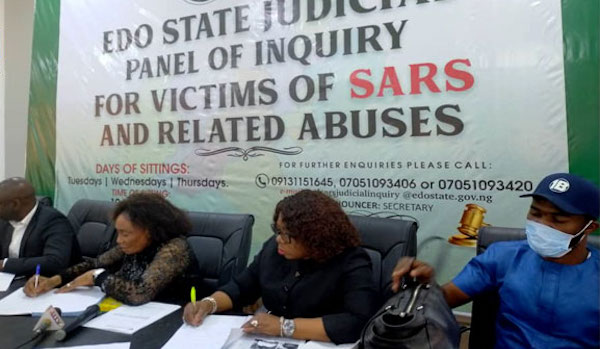 A petitioner, Issac Edoh, on Friday narrated to the Edo State Judicial Panel of Inquiry set up by the state government to look into cases of police brutality, rights violations and allegations by operatives of the disbanded Special Anti-Robbery Squad (SARS), how his son was allegedly killed by the police in Benin.

The man told the panel that the deceased, Isaac Baba Edoh, was arrested by the police in Auchi in 2011 for kidnapping and was allegedly killed by the operatives who claimed he was shot dead by armed robbers on their way to Benin.

Edoh said: “I saw my son last on June 3, 2011, and till date, his whereabouts were unknown to me as the police told me that my son was allegedly killed by armed robbers on their way to Benin City for further investigation.

“I find it difficult to believe this because, in the attack, only my son was killed; no police officer was killed or injured. I asked them to give me his body if he is dead, but the police couldn’t present me with the body.”

The petitioner said he appeared before the panel to get justice for his son.

Related Topics:Edo panel
Up Next

US ELECTION: Republicans ask Supreme Court to stop counting of votes in Pennsylvania