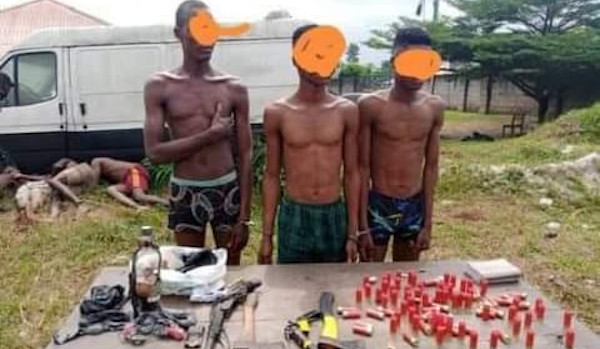 Two suspected armed robbers were on Wednesday killed during a gun duel with the police in Essien Udim local government area of Akwa Ibom State.

The spokesman of the state police command, Odiko MacDon, who confirmed the development in a statement on Friday, said the police operatives received a distress call about an armed robbery operation at Obo Annang Junction in Essien Udim LGA on Wednesday morning.

He said: “A combined team of operatives, coordinated by the Area Commander of Ikot Ekpene, ACP Nasir Kankarofo, had an exchange of gunfire with the hoodlums.

“One Pius Ubong and Sunny (other names unknown) were hit and confirmed dead after being taken to the hospital while Stephen Dominic, 20, Sunday Akpan, 22, and Friday Emmanuel Akpan, 32, all male and members of the same gang were arrested.

‘Policemen beat me till I peed on my body,’ #EndSARS protester tells Lagos panel