Police, Miyetti Allah disagree over role of Sunday Igboho in attack on home of Serikin Fulani in Ogun | Ripples Nigeria 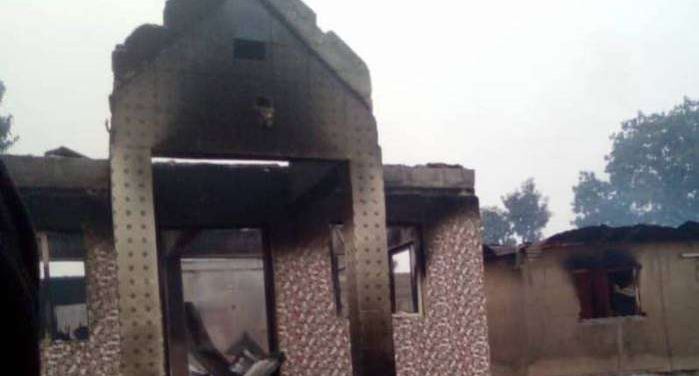 The Ogun State Police Command has confirmed the burning of the house of Alhaji Adamu Oloru, the Serikin Fulani in Eggua in Yewa North local government area in the state, saying hoodlums took advantage of the visit of activist, Sunday Igboho, to the state.

But the state Chairman of Miyetti Allah Cattle Breeders Association (MACBAN), Abdulmumin Ibrahim, claimed the attacks were coordinated by Igboho and not hoodlums as the police said.
In a statement on Tuesday, the state Police Public Relations Officer (PPRO), Abimbola Oyeyemi, said one person was burnt to death in the inferno while the hoodlums also burnt down a market, houses and dozens of cows belonging to Fulani herdsmen in the area.

“Hoodlums took advantage of the visit of Sunday Igboho to Ogun State to burn down the home of the Serikin Fulani of Eggua in Yewa North,” Oyeyemi said in the statement.

“The Commissioner of Police, Edward Ajogun, has visited the area for an on-the-spot assessment and had a meeting with the community leaders and Fulani settlers. We had a very robust session, and the two parties have resolved to work together to fish out those perpetrating crime therein.

“The CP has appealed to everybody, including Sunday Adeyemo (Igboho), that we cannot fight crime with illegality.

“He should allow justice to prevail and everybody to calm down pending when the whole issue will be resolved.

“However, everybody has agreed to work together. I think it is only in Eggua where, maybe, hoodlums took the opportunity to vent their anger. So, we have appealed to him to tread softly. Peace has finally returned,” the PPRO said.

Also confirming the incident, one of the Serikin’s sons, Suleiman Adamu, gave the name of the man who died in the fire as Alhaji Jiji while his father’s settlement was razed down by the attackers.

Suleiman added that over 40 cows were killed in the attack.

“Right now, there is tension everywhere. We managed to get our father to escape during the attacks.”

On his part, the state MACBAN leader, Abdulmumin Ibrahim, said “He (Igboho) was also at Oja–Odan but one good Samaritan called Dende did not allow him to set ablaze houses at Oja Odan. A formal complaint has been made at Egua Police station,” Ibrahim said.