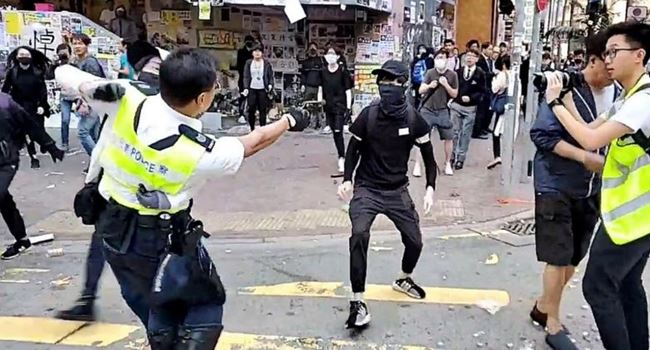 Two protesters have been arrested by the police in Hong Kong while another who was aimed at with a gun was seriously wounded in an incident which was broadcast live on Facebook.

The footage which has gone viral on social media, showed a police officer drawing his weapon in the eastern district of Sai Wan Ho as he tried to detain a masked man at a road junction blocked by violent protesters.

Al Jazeera reports that more people were beginning to gather as protesters attempt to shut down the semi-autonomous city.

“This is a general strike targeting roads and the transport system so major thoroughfares, highways have all been blocked,” she said. “There have been huge traffic jams across Hong Kong. Tempers have frayed. The crowds are building. They are gathering because of the escalation in anger after the student was shot this morning.”

The latest incident comes two days after six pro-democracy legislators were arrested and charged by police in a move which sparked more public anger following the death of a university student identified as Chow Tze-Lok.

The legislators were arrested on Saturday for obstructing the local assembly during a raucous May 11 meeting over a now-shelved China extradition bill that sparked the protests.

Other pro-democracy legislators said the clampdown was a calculated move after Chow’s death to provoke more violence, which would then be used as an excuse to postpone or cancel November 24 district elections.