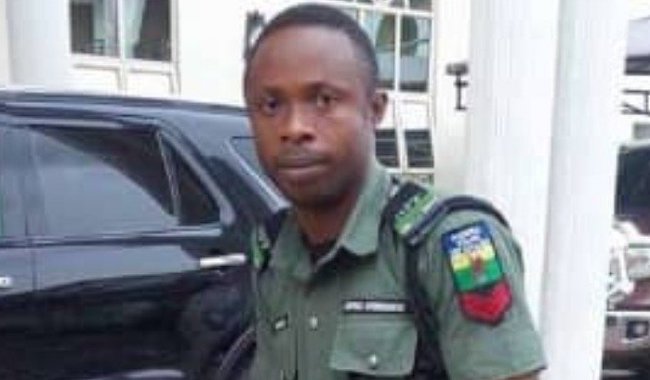 A police officer, Sgt. Governor Akpoboloukeme, on Thursday, stabbed his colleague to death in Bayelsa.

The state’s Commissioner of Police, Ben Okolo, who confirmed the incident in a statement issued on Friday by the spokesman of the state police command, Asinmi Butswat, said the off-duty officer stabbed his colleague, Sgt. Sapele Eyeridideke, to death over a minor misunderstanding at Edepie in Yenagoa.

The suspect immediately fled the scene and attempted to flee to a neighbouring state when he was arrested along the East/West Road.

The police commissioner said he had ordered the detention of the suspect and a detailed investigation into the incident.

An eyewitness told journalists the two policemen, who are cousins, attended a marriage ceremony at a popular hotel in Yenagoa where the deceased cracked a joke as they sat on a table.

“The suspect didn’t feel happy about the joke and reacted in a violent manner.

“The two men almost exchanged blows but friends stepped in and settled the duo.

“They left the venue with the belief that they were going to their separate homes.

“Rather than go home, Akpobolokeme trailed Eyeridideke to a secluded place and stabbed him with a dagger on the left part of his rib cage killing him instantly.

“The corpse has been deposited at a mortuary,” the eyewitness said.