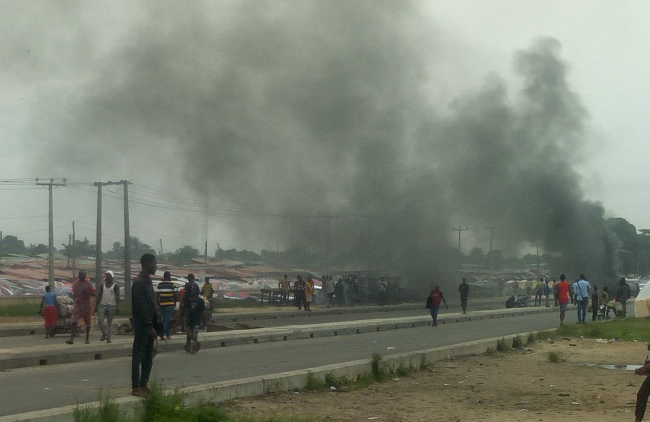 Commercial motorcycle riders, also known as ‘okada’ on Thursday clashed with policemen along the Badagry expressway in Lagos.

This is coming about 24 hours after the state government placed a ban on the activities of the okada riders in six local government areas of the state.

Governor Babajide Sanwo-Olu had during a meeting with the state Commissioner of Police, Area Commanders, and Divisional Police Officers at the State House in Ikeja on Wednesday banned the commercial motorcyclists from operating on highways in Eti-Osa, Ikeja, Surulere, Lagos Island, Lagos Mainland, and Apapa.

Trouble started when operatives of the state Joint Task Force went to enforce the ban on the Okada activities at Ojo Local Government Area of the state.

Many of the okada motorcyclists resisted the operatives’ attempts to confiscate their motorcycles.

Some of the operators and their passengers were reportedly hurt while attempting to resist the task force’s arrest.

The spokesman for the state police command, Benjamin Hundeyin, however, dismissed the report on the conflict.

He said: “There was no violence in the area. Also, there was no Okada riders clash. What happened is that the police and other members of the joint task force went to impound motorcycles. During the enforcement exercise, about 200 motorcycles were impounded.

“We urge residents to be law-abiding. The impounded motorcycles would be destroyed.”