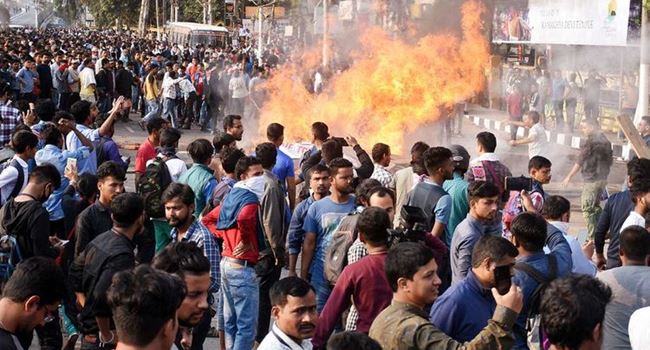 Protests over a controversial new law on migrants have raged across several Indian cities, prompting police to clash with demonstrators.

The new law entitles non-Muslim migrants from three Muslim-majority countries to citizenship if they are facing religious persecution, the BBC reports.

Police on Monday used tear gas and detained protesters in the capital Delhi as buses were torched and roads blocked.

Protests have raged across northern and eastern India since the law was passed.

Some critics said the law is anti-Muslim, while others – especially in border regions – fear large-scale migration.

Six people have been killed in the five days of unrest.

Over the weekend, demonstrators in West Bengal blocked key national highways while in Assam, the state government briefly lifted a curfew to allow people to buy essential goods.

The United Kingdom, United States and Canada have issued travel warnings for people visiting India’s north-east, telling their citizens to “exercise caution” if travelling to the region.

Students of the prestigious Jamia Millia Islamia university held a protest march which ended in clashes with the police on Sunday.

It is still unclear who started the violence but stones were thrown at the police who retaliated with tear gas.

Local media reported that nearly 60 people, including students and police, were injured. At least three buses and several motorcycles were set on fire.

Students distanced themselves from the violence and some police officers privately admitted that local troublemakers were behind the trouble.

“2 fighting”, man in police trouble after he pushed another to the ground killing him

Zambia tells US to withdraw ambassador