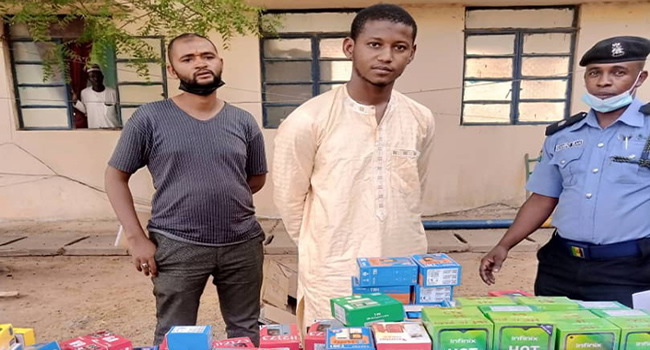 The Katsina State Police Command has arrested a suspected thief who stole not less than 273 mobile phones worth N15m.

The suspect identified as Ibrahim Lawal is a 23-year-old ex-convict, according to the Police, and specialises in house breaking and theft of motorcycles.

This was revealed by the spokesperson of the Katsina Police command, SP Gambo Isah, who disclosed this in a statement on Friday.

“On 22/04/2021 at about 07:00hrs, based on tip off, the Command succeeded in arresting one Ibrahim Lawal, alias ‘ABBA KALA’, ‘M’, aged 23yrs of Fegi Quarters, Daura LGA of Katsina state, a notorious thief and ex-convict, a habitual criminal, who specializes in House breaking and theft of motorcycles,” Gambo stated.

“Nemesis caught up with the suspect when he trespassed into the house of one Kamalu Ibrahim, ‘M’, aged 33yrs of Shagari Low cost, Daura, and broke into his motor vehicle, BMW 3 Series, with registration number JW 01 DRA and stole away two hundred and seventy-three handsets valued fifteen million Naira (N15, 000, 000)

“In the course of investigation, all the stolen two hundred and seventy-three (273) GSM handsets were recovered in his possession during police search. Suspect confessed to the commission of the offence. He will be arraigned in court immediately investigation is completed,” he added.

Related Topics:Katsinapolicestolen phones
Up Next