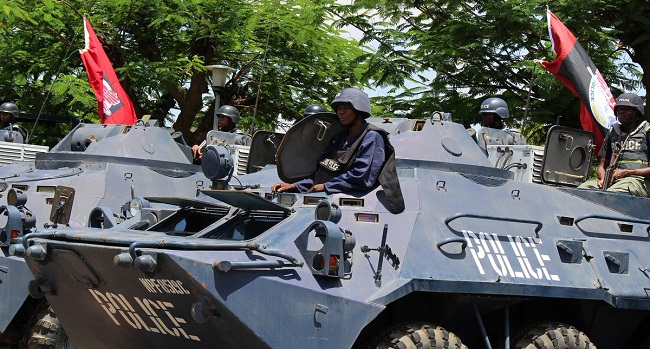 The Explosive Ordnance Disposal unit of the Nigeria Police Force, on Monday narrated how the unit recently recovered an 80mm Mortal Bomb from the premises of the Independent National Electoral Commission (INEC) in Owerri, the Imo State capital.

According to the command, the 80mm Mortal Bomb was evacuated to the EOD base in the state, adding that three IEDs were also recovered from the BUA Cement Company premises in Okpella, Edo State on October 1, 2019.

“On August 27, 2019, around 8.30pm, EOD personnel in conjunction with the FCT Police Command recovered 50 cartridges of commercial high explosive and 100 pieces of electric detonator at El-Rufai Motor Park, Nyanya, Abuja. Two suspects were apprehended and that matter is being investigated,” the command stated.

The Commissioner of Police in charge of the unit, Maikudi Sheu, disclosed these on Monday in Lagos while receiving two mobile detection systems donated by the United States Department of Energy/National Nuclear Security Administration, Office of Nuclear Smuggling Detection and Deterrence.

According to Sheu, the equipment (two special vehicles) would assist the command in intercepting explosives being smuggled into the country.

He said: “We need to fortify the entry and exit points of our country with the provision of these two vehicles. They will go a long way to help us detect materials that are illegally coming into our country. It will help us to put an end to the nefarious activities of these criminals.

“We are starting with two. We will discuss with the Inspector-General of Police to know how best to deploy these vehicles. When we do that and see how effective they are, then we will have to procure more to be able to cover other borders.

“I urge all participants to ensure effective use of the equipment and utilise the knowledge to be acquired from this training to enhance our national nuclear security.”

The Senior Advisor, US-DOE/NNSA/NSDD, Bryceon Shulman, while speaking at the handover ceremony, said the gesture was an attempt to form a long-lasting partnership with Nigeria in the fight against trafficking in radioactive materials.