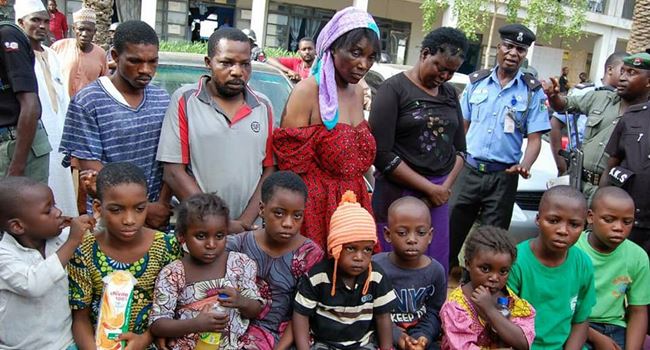 The Kano State Police Command has confirmed the rescue of at least nine children who were abducted at different times in the state.

The development was confirmed on Saturday by the state Commissioner of Police, Mr. Ahmed Iliyasu, who said the children were about to be trafficked to Anambra State when they were rescued from human traffickers.

According to him, a group of human traffickers, that have been operating for over five years in Kano was arrested by the command’s tactical team and the Inspector- General of Police Operation Puff Adder attached to the anti-kidnapping squad.

The police commissioner disclosed that the children held captive by the kidnapping gang led by Paul Owne (38) and his wife, Mercy Paul (38) are between the ages of two and 10.

Iliyasu said: “Six suspects were arrested in connection with the kidnapping, buying, and selling of the children. They were discovered in Onitsha, from Ebere Ogbodo (45), a teacher, at a school in Anambra State, who is the buyer and seller of trafficked human beings.”

He said that one of the victims, Usman Mohammed (5) was kidnapped and sold for N1.2 million, but luck ran out of Paul and Mercy and other four kidnappers who were apprehended.