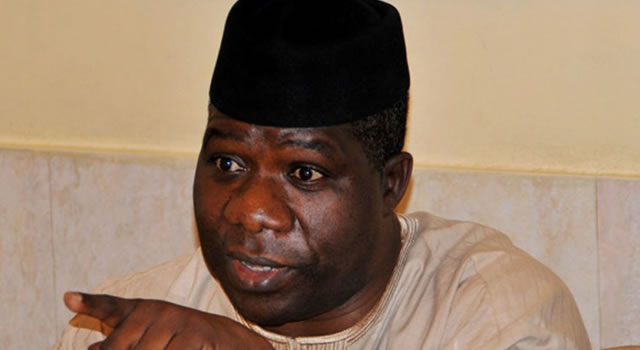 A former aspirant of the All Progressives Congress (APC) in Ekiti State, Opeyemi Bamidele, has been reported shot.

He was said to have been shot by a mobile policeman at the party secretariat in Ajilosun, Ado-Ekiti, during a reception for the governorship candidate of the party, Dr. Kayode Fayemi.

While he has been rushed to the hospital, and his condition unknown, another person whose identity is also unknown, who was also hit by the policeman’s bullet, is said to have died on the spot.

Party faithfuls at the scene of the shooting were said to have descended on the policeman, beating him to a pulp until he was rescued by his colleagues who whisked him away to safety.

A report by Punch claims an eyewitness revealed the policeman was provoked by some thugs who waylaid dignitaries at the secretariat.

Bamidele was reportedly standing with Governor of Ondo State, Rotimi Akeredolu (SAN), Fayemi and former Minister of State for Works, Prince Dayo Adeyeye, when the policeman pulled the trigger.

Also, it was reported that the cameraman of Core TV in Ekiti, Sunkanmi Ogunmuko, also sustained injuries in the ensuing melee. Other reporters at the scene were said to have scaled the fence to safety to avoid being hit by bullets as well.

This, it was reported, led to an angry mob descending on the mobile policeman, hitting his head with sticks and other items before he was rescued by his colleagues.

However, in a counter claim, the chairman of the All Progressives Congress (APC) in Ekiti State, Jide Awe, said  Fayemi was the target of the shooting.

Speaking to Channels Television, the party chairman said Bamidele only accidentally received a shot meant for Fayemi by the shooter who was dressed in a mobile police uniform. He added that the former Reps member was walking with the former minister when the shooting occurred.

“When he shot at the crowd, I believe sincerely that he (the police) aimed at Dr Kayode Fayemi but narrowly, he (Fayemi) was pushed by somebody walking behind him,” Awe said.

“Opeyemi Bamidele was equally very near him and the shot hit him. But I can say authoritatively that he’s not badly hit, and he is recovering as we are talking,” he added.

The APC chairman, who witnessed the incident, noted that those at the scene thought the shot was fired by an overzealous officer who was trying to pay respect to the former minister.

He said he was just returning from the hospital and proceeding to another medical facility where the other gunshot victim was being attended to.

Asked how sure he was about his claim that Fayemi was the target of the shooting, Awe insisted, “To a reasonable extent because he and Bamidele were walking together but narrowly, he was pushed by somebody behind him (although not intentional).

The police authorities in the state have confirmed the incident, disclosing that they have begun an investigation into the shooting.