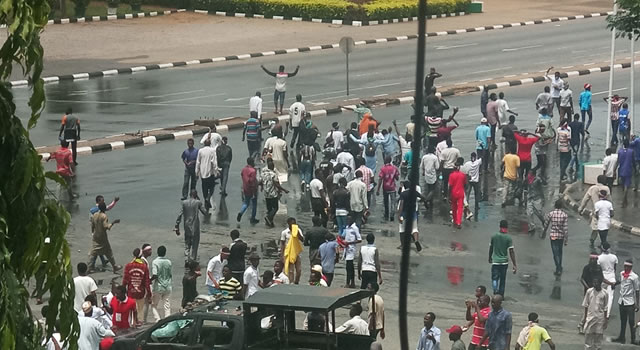 A protest by members of the Islamic Movement of Nigeria (IMN), turned tragic on Tuesday when a a stray bullet from the police killed a passerby at the Berger area of Wuse, Abuja.

The passerby was hit by bullet when the police fired gunshots and teargas canisters to disperse the IMN members who had gathered for a protest,leading to a scare among commuters and other passersby, who ran for their lives.

The procession by the Shi’ites procession, which took off from the Utako district of Abuja, also came to an abrupt end while the remains of the deceased was taken away by the police in one of their vans.

This is coming about a week after three members of the Shi’ite group were injured during a protest in Kaduna after the police fired gunshots and teargas canisters to disperse the IMN members who demanding for the release of their leader, Sheikh Ibraheem El-zakzaky and his wife, Zeenat.

Confirming the incidence, DCP Anjuguri Manzah, the spokesman for the Federal Capital Territory Police Command, said in a statement that the protest recorded one casualty.

He also explained that the command restored calm at the Berger roundabout following a violent protest by the IMN members “who went berserk and were attacking innocent citizens and police operatives with dangerous weapons.”

“As a result of the unfortunate incident, one person who sustained an injury and was rushed to the hospital for medical attention has been certified dead by medical doctors on duty.

“Meanwhile, the FCT Commissioner of Police, Bala Ciroma, has ordered a full-scale investigation into the unfortunate incident.”