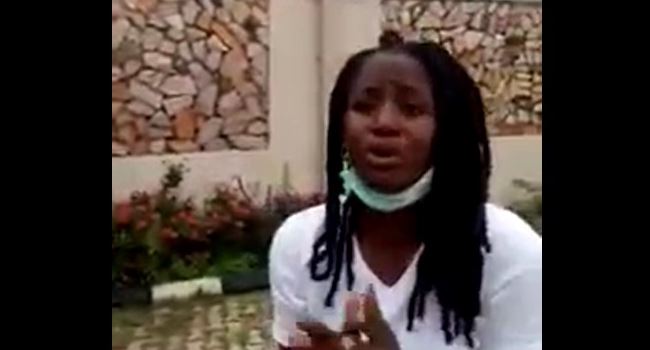 The Nigeria Police Force on Thursday said the force has identified all person involved in the dehumanizing treatment meted to a 25-year-old lady, Towobola in a video that went viral on social media.

The NPF, in a statement by its spokesman, DCP Frank Mba, said two of the officials, ASP Tijani Olatunji and Inspector Gboyega Oyeniyi, have been arrested.

In the viral video, ASP Olatunji, who called himself Wyclef, alongside others, were seen terrorising the young lady, who they accused of dating a kidnap suspect, asking her crude and dehumanizing questions, with threats of beating her if she failed to answer.

The video elicited angry reactions from a broad section of Nigerians, who called on police authorities to sanction or dismiss the erring police officers for unprofessional behaviour.

Mba said in the statement: “Following investigations into the dehumanizing treatment of a female citizen as shown in a viral video on Wednesday, 22nd July, 2020, the Nigeria Police Force have identified three (3) police officers and one (1) civilian accomplice who participated in the unprofessional act.

“Two (2) suspects, ASP Tijani Olatunji and Inspr Gboyega Oyeniyi have been arrested for their role in the discreditable conduct and incivility to a member of the public. They are currently being detained at the Lagos State CID detention facility, Panti, Yaba.

“Preliminary investigations show that the policemen who are attached Area ‘A’ Command, Lion Building, Lagos, were on legitimate investigation activities to Ibadan, Oyo State where the incident took place.

“Effort is being intensified to arrest the two other accomplices. Meanwhile, appropriate disciplinary procedure will be initiated as soon as investigations are concluded.”