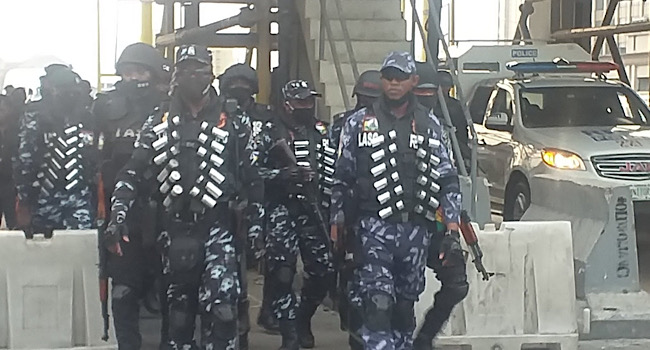 The Lagos police command on Monday stated emphatically that it’s officers will remain at the Lekki toll gate until further notice, a directive given by the Commissioner, Hakeem Odumosu.

No fewer than 40 EndSARS protesters including popular comedian Debo Adebayo aka Mr Macaroni were arrested and arraigned on Saturday for defying the authorities’ order against the demonstration.

The police spokesperson, Muyiwa Adejobi stated on Monday while mentioning five locations its men have laid siege in the area.

“Our policemen are still at the tollgate, it is a deployment and we are working with an operation order and until there is a stand-down order of the operation from the Commissioner of Police, Hakeem Odumosu, the men will still be there.

‘’We have not arrested anyone today, there was no breakdown of law and order, no gathering or procession, everything is normal in the area.

He mentioned that policemen have been deployed to the Lekki toll gate, Unity Park, Gani Fawehinmi Park, Ogombo Junction, Adeniran Ogunsanya Junction, among others,’’ he said.

“But we are still maintaining our ground there and we have deployment in about five places aside from the Lekki tollgate and our men are still on standby at these strategic places.”

LAGOS: Train collides with truck, as BRT bus goes up in flames