POLLS: Atiku, Secondus warn Army, police, say it will be terrible for Nigeria if they take sides | Ripples Nigeria 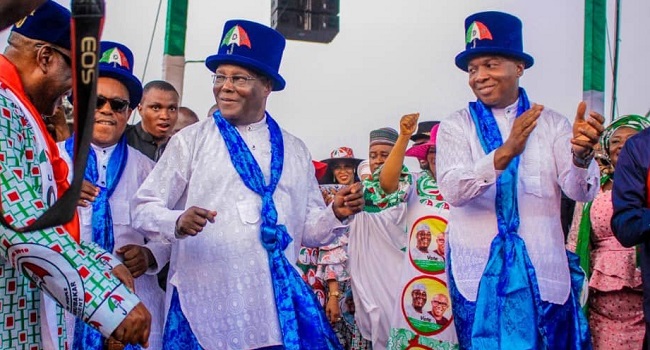 Presidential candidate of the Peoples Democratic Party, Alhaji Atiku Abubakar, and the party’s national chairman, Uche Secondus, on Friday warned the military not to interfere in the general elections.

They said the security forces must ensure they only played their constitutional roles during the coming elections and warned them against taking sides as doing that may leave the country in a terrible situation.

Atiku and Secondus spoke at the party’s presidential campaign rally at the UJ Esuene Stadium in Calabar on Friday.

The former vice-president said that he would go to any length to protect the constitution.

He told the people of Cross River, “I will work closely with Governor Ben Ayade to actualise the deep seaport and the superhighway. The deep seaport will create thousands of jobs. We will invest more in education. We will invest in the industries he is establishing by bringing in investors so that the state could be transformed.”

READ ALSO: We’ll deal with ‘those we can touch’, but only God can punish PDP- Buhari

In his speech, Secondus said, “The good news is that Atiku has won. All international and local polls conducted have given victory to Atiku.

“You heard about the body bag statement made by them, they have lost the election in Katsina. We will collect Katsina. Our votes will count, they are scared, they are in confusion and running from pillar to post. Our state institutions cannot be destroyed because of one man.

“The police, army and other security agencies should not take sides in this election if not it will be terrible for Nigeria.”