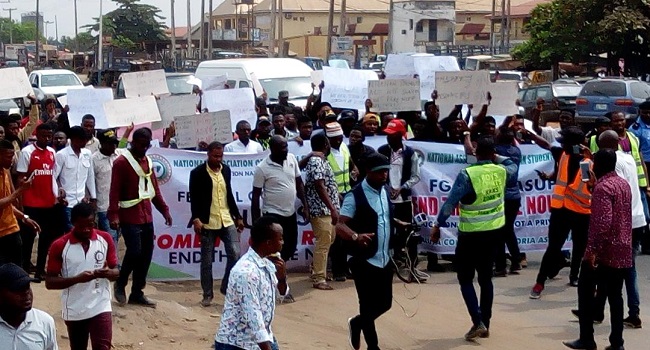 The National Association of Nigerian Students (NANS) has declared Monday February 18 as a day of nationwide protest by Nigerian students against the postponement of the general elections by the Independent National Electoral Commission (INEC).

Spokesman of the association, Mr. Azeez Adeyemi, disclosed this while speaking with newsmen in Abeokuta on Saturday.

He stated that the association was fully mobilised for the protests and that no attempt to stop it would succeed.

He described the situation as “show of shame and disgrace to a country.”

The body lamented that countries often learnt from their past, “but, that is not so with Nigeria.”

Adeyemi warned that the sovereignty of Nigeria should not be toyed with by selfish leaders, adding that the unity of the country should not be jeopardised.

He stated that it was a shame and a bad signal to international observers that the credibility of the forthcoming elections was diminishing.

“The sovereignty of Nigeria should not be toyed with by any leader. Our forefathers fought for this; the unity of the nation should not be frustrated.

“NANS declares Monday 18th of February, 2019 as a day of nationwide protest by Nigerian students .

“We hereby state categorically that no attempt by security agencies to disrupt this protest will survive.”

The students’ body, however, asked the INEC Chairman, Prof. Mahmood Yakubu, to tender his letter of resignation over the development.

The NANS said “Our position is that INEC chairman should resign and President Muhammadu Buhari should strengthen Nigeria’s security”.

The body accused President Buhari of not living up to the expectations of Nigerians.

Adeyemi added that the postponement would not have been made possible without the knowledge of the President.

He said : “For over three months now, even, till yesterday (Friday), INEC has been assuring Nigerians that the commission is fully ready, why now calling off the election on the day of the election.

“NANS still holds the view and sure of the fact that this postponement is not the complete decision of the INEC chairman, but, by some cabals at the Presidency.”