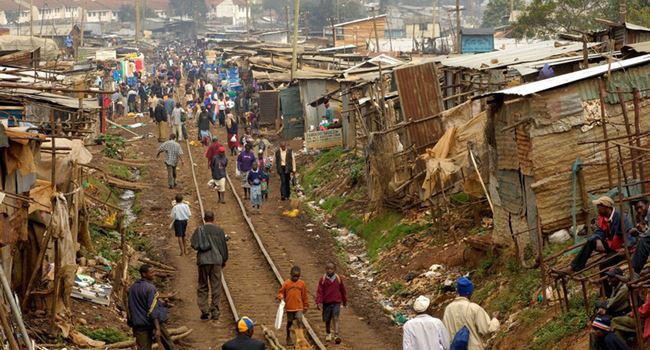 When politicians failed you, professors failed you, bosses failed you, banks failed you, relatives failed you, pastors and imams failed you: who is going to deliver us from the devil? It boils down to You and Your Chi. That is Me, Myself and I. Until we are tested, you never realize the Supreme Being within you. This is why Africans survive in the most hostile environment outside home against all odds. Mumuat home Tiger outside!

What encourages perseverance, hard work and long-term investment in the community we live in, are slipping away. In spite of the death sentence on kidnappers in some states, greed has captured many men and women including our pastors and imams. They are being kidnapped for ostentatious display of luxuries or may have joined them; by kidnapping themselves and asking church members for ransom.

Women are coming out claiming they were turned into sex slave by men of God. So our pastors and imams are also tempted by nice moderate, not too big ikebe. We should not be surprised that Poverty, Armed Robbers, Kidnappers and Immorality in our churches and mosque are increasing when money-miss-road expose themselves on social media thanking God for exotic cars, houses, designer items and personal aircrafts.

Despite obvious evidence that fast money has short lifespan, lotteries come and go fast while drugs money only compounds your problems and makes many of us bankrupt morally. Forget FBI or EFCC cashisticfirst, regret it later. The new generation and even their poor parents have ways of celebrating vanities and tastes that have liquidated our moral fiber. You do not ask or care how our kids and youth make their money anymore.

The silent majority gave up and the rest of us cherish the selfish economic gains that come our ways. We blame everything on our leaders while we encourage and celebrate obscene diversion and accumulation of commonwealth for personal aggrandizement in and outside the country. People sell patriotic values to foreigners as long as they get a cut. Who else would celebrate the demise of a country at the expense of selfish gains?

Honestly, the situation has not changed today compared to the days our fathers sold gold in exchange for mirrors. We are still being used as experimental guinea pigs. Europeans and Americans are exposing the Chinese and the Russians for taking advantage of Africans. The same way they did until Asians beat them with lower rates.

The fact is, these parasitic relationship Africa has with all of them is not sustainable. A good case in point is Ajaokuta Steel that has not been productive in 40 years. Russians agreed to build it after others refused because they did not want competition creating steel glut in the world market. So, Russians agreed to build but either way, we lost!

Foreigners are still using us against one another by using our safety, security while they cart trillion dollars away in odious profit disguised as investment that could not be made anywhere else. We have not learned from Sierra Leone where diamond became our nightmare in war, Nigeria where oil income turned into a curse and now Central African Republic where Russia is training us against one another in preparing for another war.

It is human to celebrate success and show appreciation by giving back or embarking on worthwhile humanitarian community services. But it usually happens with the profit made from creative entrepreneurships, success of a business deal that brings value to the community like jobs and technology. Success has never been a way to spite, entice underage girls or incite the poor to break their necks trying for amorphous enterprises.

We all agree that corruption from the office messengers to the highest level of government is a cancer that must be challenged and contained to the barest minimum; unless he is our kin. There used to be a time when these few bad eggs were disowned and could not get a lady to marry. No more. They are now celebrated. Indeed, they have created a class of their own and replaced those that earned their wealth the old fashioned way, by hard grueling perseverance.

Definitely, wealth is a powerful incentive in any system or community and there are different philosophical ideologies of how to get there. Each of these has regulations and laws in place for checks and balances; otherwise every gain goes up in flames. After about 60 years of Independence in African countries, we know what works and policies that have made our economy worse as a country and as a continent.

We cannot keep on preaching the same policy by claiming it was not implemented properly when it took us backwards each time. Structural Adjustment was a failure and Devaluations in exchange for printed papers, not on Gold Standard or resources is a farce used to capture preferred cheap raw materials, products and services in Africa.

Read also: Beating of Ekweremadu and the stones awaiting others

Yet, after appealing to reason and logic over and over again that Africans must go cold turkey and wean themselves out of imported vanities that are basically another form of drugs without long-term values, we continue on these suicide mission. This may be understandable if there are no countries we can trade with, since African countries trade with other continents far more than they do within Africa.

If that is not colonial mentality, we must wonder what else that could be. We have lost great men and women preaching against this economic dependency for too long. Even worse, we internalize and repeat derogatory terms (as shithole countries) chagrin used against us for being so dependent and so easily susceptible to their manipulations.

We were fooled into believing that once we open African countries to Europe, America and Asia, foreign investment would flow in and make us rich. In return for free market, some of us had the opportunity to travel overseas to collect used and discarded clothes, shoes and appliances given by charities only to sell them at home. This was our reward for open market so that anyone could import to exhaust our forex by taking money out.

Seriously folks, how do the poor people they are using compared to those taking the lion share of our forex in US dollars and Euro? Yet, if they don’t get their way, our jobs were threatened and if imported food are not allowed, they scare us with starvation in our fertile arable land. The same business men that took loans from banks without paying back bankrupting financial institutions while working class lose all their savings.

One has to wonder how African countries that do not have the financial manipulation, power and clout like the United States can survive when 50 to 90% of their income is used to service loans. The Chinese are taking over the infrastructure they built in East African countries since a country like Zambia could not pay back what they know Zambia could not afford before giving them the loan in the first place.